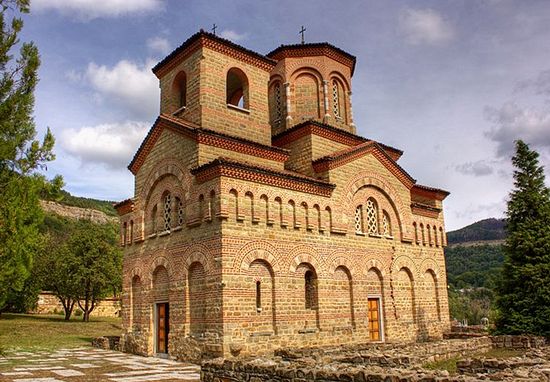 The St. Dimitar Solunski Church was restored in 1985 for the 800th anniversary of Asen and Petar’s Uprising that created the 2nd Bulgarian Empire. Photo: Veliko Tarnovo Municipality

Ahead of the 830th anniversary of the founding of the Second Bulgarian Empire, the northern Bulgarian city of Veliko Tarnovo has opened for visitors and planned special events the restored St. Dimitar Solunksi (St. Demetrius of Thessaloniki) Church where 830 years ago local nobles Asen and Petar started an uprising against the Byzantine Empire leading to the resurrection of the Bulgarian state.

The St. Dimitar Solunski Church, a monument of culture restored in 1985 for the 800th anniversary of Asen and Petar’s Uprising based on the excavations of the preceding two original temples with the same name, will be opened from October 22 until November 8, 2015, which is the period when eventscelebrating the 830th anniversary since Asen and Petar’s Uprising will be held.

Except for the summer season, the church can be visited only if an appointment is booked in advance,Veliko Tarnovo Municipality says in a media release inviting people from all over Bulgaria andinternational tourists to visit the historical monument.

On October 26, 2015, when Veliko Tarnovo and all of Bulgaria will celebrate the 830th anniversary since the Uprising of Tsar Asen I and Tsar Petar IV, which restored the Bulgarian state in 1185 AD, after it had been conquered by the Byzantine Empire in 1018 AD.

830 years ago the Uprising of Asen and Petar recorded one of the most glorious pages in Bulgaria’s medieval history.

It liberated Bulgaria from Byzantium after 167 years of Byzantine domination, and created the Second Bulgarian Empire (1185-1396/1422).

They ruled as co-emperors; both of them were murdered, and were succeeded by their young brotherTsar Kaloyan (r. 1197-1207).

The Asen Dynasty (House of Asen) that they started ruled the Second Bulgarian Empire from 1185 until 1257 AD.

Their empire ruled territories from the Carpathian Mountains in the north to the Aegean and the Adriatic in the south (see the map below) restoring most, if not all, of the territorial, military and economic might of the First Bulgarian Empire (632/680-1018 AD). 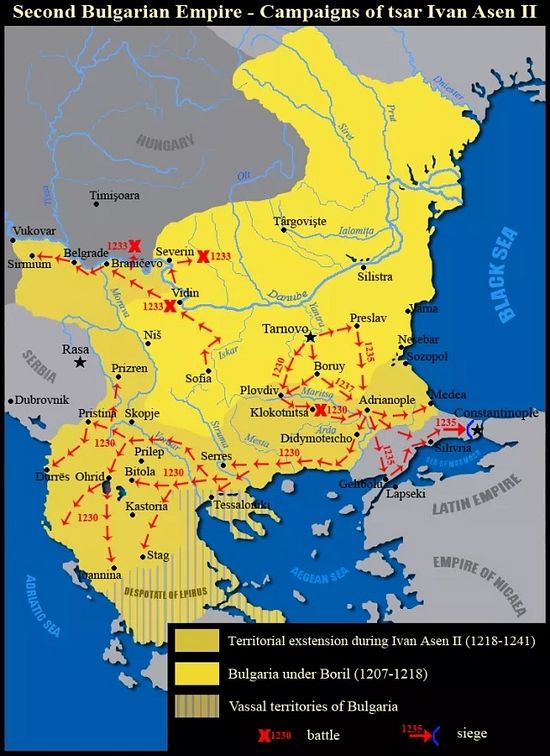 The military campaigns and battles of Tsar Ivan ASen II of the Second Bulgarian Empire. Map by Kandi, Wikipedia

A view of the restored St. Dimitar Solunski Church at the foot of the Trapesitsa Hill in Bulgaria’s Veliko Tarnovo, with its surroundings. Photo: Magnus Manske, Wikipedia 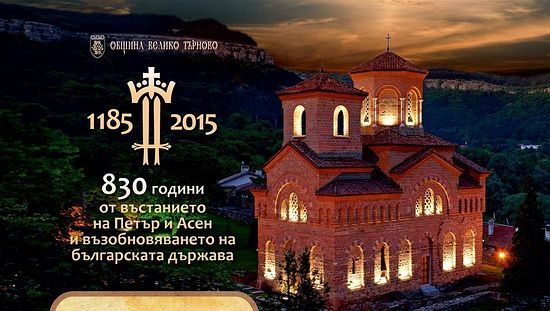 A poster for the celebrations of the 830th anniversary since the liberation of Bulgaria from the Byzantium and the foundation of the Second Bulgarian Empire showing the St. Dimitar Solunski Church. Photo: Veliko Tarnovo Regional Museum of History

The St. Dimitar Solunski (St. Demetrius of Thessaloniki) Church in Bulgaria’s Veliko Tarnovo is arestored church based on the excavations of the original medieval church with the same name which existed there during the Second Bulgarian Empire (1185-1396 AD) with its capital in Tarnovgrad (Veliko Tarnovo).

The St. Dimitar Solunski Church is connected with the restoration of the medieval Bulgarian Empire,after in 1018 AD Byzantium had conquered most of the Bulgarian territory and destroyed the First Bulgarian Empire (632/680-1018 AD).

According to Byzantine chronicler Niketas (Nicetas) Choniates (ca. 1155-1215 AD), the St. Dimitar Solunski Church in Veliko Tarnovo is where in 1185 AD, local boyars (nobles), brothers Asen and Todor (Teodor), who later took the name “Petar” after Tsar Petar I (r. 927-969 AD), becoming Petar IV,proclaimed the restoration of the Bulgarian state.

This is where they started their rebellion, known as the Uprising of Asen and Petar, against theByzantine Empire creating the Second Bulgarian Empire.

They ruled as co-emperors; both of them were murdered, and were succeeded by their young brotherTsar Kaloyan (r. 1197-1207).

The restored St. Dimitar Solunski Church is located on the right bank of the Yantra River, at the foot of the northeastern slope of the Trapesitsa Hill, one of the two citadels of the medieval Bulgarian capital Tarnovgrad.

It was rebuilt near the ruins of the original church between 1977 and 1985 by Bulgarian architect Teofil Teofil based on the excavations of archaeologist Assoc. Prof. Yanka Nikolova and on other surviving historical monuments from the same period.

The temple is 16 meters long, and 8.5 meters wide. The restored church was opened as a museum in 1985 on the 800th anniversary since the Uprising of Asen and Petar and the liberation of the Bulgarian state from Byzantium.

The original medieval church St. Dimitar Solunski near the Trapesitsa Fortress was where the rulers from the the Asen Dynasty (House of Asen) ruling Bulgaria in 1185-1257 AD were crowned. It was the core of a monastery whose four large buildings were unearthed in the archaeological excavationsstarting in 1971.

Both the original church and the monastery were destroyed in the third quarter of the 13th century AD, possibly by an earthquake. In the 14th century, the site of the collapsed church was turned into aChristian cemetery that was in use until the 20th century. In the Christian necropolis there, thearchaeologists have found more than 500 funerals.

In the late 14th century, materials from the destroyed church were used to erect a new one nearby, on top of the ruins of the former southern monastery building. The new church was badly damaged in the 19th century, and was ultimately destroyed by an earthquake in 1913.

Only its apse with some original murals was preserved. There are two layers of preserved murals – the first from the time of the church’s construction, and the second – from the end of the 16th and the beginning of the 17th century.

The original medieval church, the second church built in the 15th century, and the church restored in the 1970s-80s are named after St. Dimitar Solunski (St. Demetrius of Thessaloniki), a Christian martyr-saint who lived in Thessaloniki in the 3rd century AD. St. Dimitar Solunski was the patron saint of the Asen Dynasty that founded the Second Bulgarian Empire.

At the time of their Uprising, the boyar brothers Asen and Petar declared that the warrior St. Dimitar Solunski had deserted Thessaloniki, and had come to Tarnovgrad (Veliko Tarnovo) to aid their rebels.

The site of the St. Dimitar Solunski Church at the Trapesitsa Hill in Bulgaria’s Veliko Tarnovo was firstexcavated in 1906-1921 by the local archaeological society. The comprehensive excavations started in 1971 by Yanka Nikolova and Mirko Robov.

The archaeologists found that the original temple was a one-apse crossed-dome church with rich outside and inside decoration. The outside decoration was achieved by alternating layers of stone, mortar, and bricks in the church’s walls. 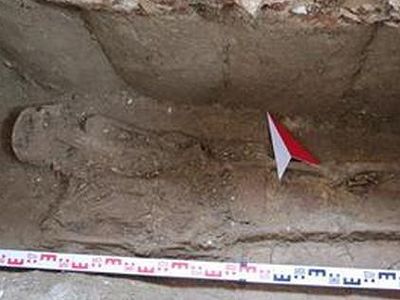 Skeletons Found in Early Christian Tomb on St. Ivan Islan Off Bulgaria's Sozopol Belonged to Syrian Monks Who Brought St. John the Baptist's Relics “After completing the excavations we have found that the way [the tomb] was built differs from all other known tombs in Bulgaria from this time period. Its foundation is tiled with 18 tiles of equal size covering all four walls. Above the tiles comes the arched structure of the roof. The floor is tiled with the same kind of tiles,” Popkonstantinov explains. 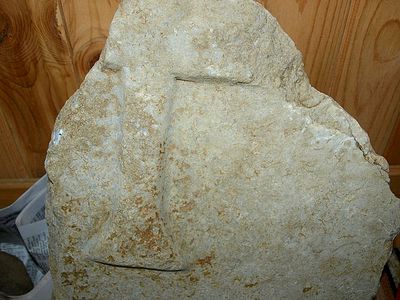 Archaeologists Find Child Funeral, Marble Cross at Early Christian Basilica Near Bulgaria's Rakitovo A child grave and number of intriguing archaeological artifacts including a large marble cross fragment have been discovered by archaeologists excavating an Early Christian basilica in an area known as Nikolitsa near the town of Rakitovo, Pazardzhik District, in the Rhodope Mountains in Southern Bulgaria.
Комментарии