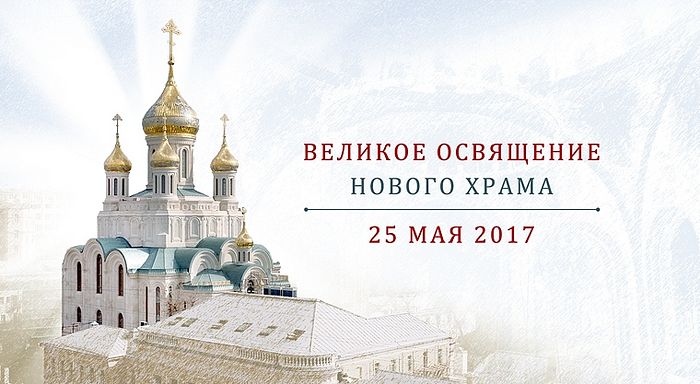 "The Great Consecration of the New Church"

A live broadcast of the great consecration of the new Church of the Resurrection of Christ and the New Martyrs and Confessors of the Russian Church at Moscow’s Sretensky Monastery, to be celebrated by His Holiness Patriarch Kirill on May 25, the great feast of the Ascension of the Lord, will be available to watch online at the site of the Russian television station Tsargrad.

The meeting of the patriarch and the rite of consecration will take place at 9:00 AM (2:00 AM EST) on Thursday morning, followed by the Divine Liturgy for the great feast of the Ascension at 10:00 AM (3:00 AM EST).

Among those concelebrating with Pat. Kirill and Sretensky abbot Bishop Tikhon (Shevkunov), will be His Eminence Metropolitan Hilarion of Eastern America and New York, the first hierarch of ROCOR. President Vladimir Putin will also be present at the services and will meet with the ROCOR delegation in honor of the anniversary of restored communion.