The Appearance of the Prophet Elijah to a Soldier 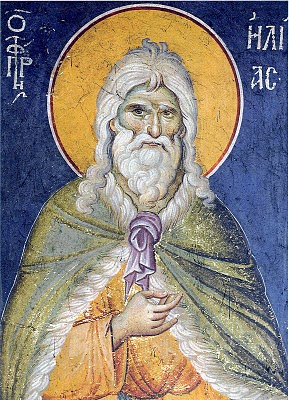 Speaking with brother Theoktistos from Epirus on 20 July 1972, he asked me if I heard of the wondrous miracle that occurred fifteen years ago in Ioannina to a soldier who was stationed to guard the barracks. I told him I had not heard it and asked him to tell me so that I could write it down to the glory of the Prophet Elias (Elijah) who celebrates today.

"Listen", he told me. "A soldier was stationed to guard a barrack and at around midnight he heard the footsteps of a person approaching him. The soldier thought it was an officer who, as is customary, went to go check to see if he was awake or sleeping, etc. The soldier yelled: 'Halt!' but again heard the steps approaching him. For a second time he yelled: 'Halt! Who's there?' Having his weapon in hand, he received no response. He was then forced to say: 'Halt or I'll shoot!'

"As soon as he said 'shoot', his weapon left his hands, and landed about fifty meters away. He then saw suddenly, instead of an officer, as he thought it would be, a priest with a lightning-like brightness of light! When he saw this, he was very much afraid. The priest told him: 'Do not be afraid, my child, do not be afraid, but tell me, why O blessed one do you blaspheme the divine? Christ, the Panagia and the Saints?'

"Feeling remorse, he began to tear up and asked forgiveness for his sin, saying: 'Forgive me, holy Father, but it is because of my evil and many years of bad habits that I do this. Forgive me.'

"The Saint told him: 'You are to preach to everyone to repent, and to not blaspheme. Communicate this to the Metropolis and to everybody. Even the newspapers should publish this.'

"The soldier responded: 'They will not believe me, O Saint. But tell me, who are you?'

"'I am the Prophet Elias. And so that the people will believe you more, you will tell them at that cliff (and he pointed to the area) they are to dig and they will find an old church of mine and on top of this they are to build a church.'

"He went and related this to the entire city and it was distributed in all the local newspapers. Many believed and changed their lives. The association of bakers, who honor the Prophet Elias as their patron, dug at the cliff which was indicated to them, and they uncovered an old church and built a new one to the glory and honor of the Prophet Elias.

"The soldier changed many lives and the bad habits of people, and lived the rest of his life as a role model of a good Christian."

Through the prayers of Thy Holy Prophet Elias, have mercy on us O Lord. Amen.

...
Предыдущий Следующий
Комментарии
Войдите через FaceBook ВКонтакте Яндекс Mail.Ru Google или введите свои данные:
Albocicade 8 ноября 2013, 03:00
This text has been translated in french here : http://orthodoxologie.blogspot.fr/2013/11/moine-lazare-de-dionysiou-mont-athos.html
Catholic facing east21 августа 2013, 00:00
Please, can you give me the name and address of this Church as I wish to visit and venerate. This is an eschatological event and very typical of both new and old testament Saints.