The film Priest-San: Samurai's Confession based on priest and actor Ivan Okhlobystin's script has been released. Renowned American actor of Japanese origin Cary-Hiroyuki Tagawa played the leading role in the movie of an Orthodox priest and adopted Orthodoxy after participating in the movie. He speaks of how he got acquainted with Russia and Orthodoxy in his interview with Interfax-Religion's correspondent Polina Frolova. 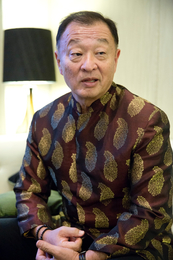 - Your role as an Orthodox Japanese priest was unexpected. You were not Orthodox before participating in the film as you have lived in America since you were five.

- As far as the role is concerned, it was unexpected, but at the same time long-awaited. I mostly played 'bad guys' in Hollywood. I had to represent a true Christian in the film offered by producer Lyubov Kalinskaya in a script of my new friend Ivan Okhlobystin. It was really difficult and it is a big responsibility. I have known the teaching of Jesus Christ since I was a child. My mother, a Japanese by origin, took us to the Christian American Church to make us understand the culture and religion of the country we live in.

- How did you get acquainted with Russia and Orthodoxy?

- I first visited Russia in 2001. I've been here seven or eight times. But only after participating in the Russian movie Priest-San: Samurai's Confession did I understand what is 'Mother-Russia'. We lived in the country, talked to ordinary people.

I was very inspired and impressed to see how strong and firm you, Russian people, are. True warriors. I feel that I am connected with Mother-Russia on some deep level and I want to be part of it.

I decided to become Orthodox not long ago, but I was thinking about it for a long time. I was trying to find my own way all my life, my place in the world. When we came to America in my early childhood, we adopted Christianity. My brother and I attended a Sunday school in the USA. However, there is more form in American Christianity. And I was looking for content. Nowhere else did I manage to find such depth as in the Orthodox faith. Only now when I am 65 I feel that I have managed to find my right place. Formally, I made my choice not long ago, but it took all my life to come to it.

- You decided to be baptized in Orthodox faith. The head of the Synodal Department for External Church Relations, Metropolitan Hilarion of Volokolamsk baptized you in the Church of The Icon of Mother of God Joy of All who Sorrow with the name Panteleimon. Why did you choose this saint as your heavenly protector?

- I was very serious about the choice and made it with great responsibility. I was a healer before I started playing in Hollywood movies actively. I still have my own respiratory practice which helps to recover and return vital tone. Saint Panteleimon who cured people with God's name and helped them cope with their troubles inspired me very much. I understood that physical recovery is possible only if you are spiritually healthy. There is no other way. Such spiritual recovery is impossible outside the Church, without faith.

- While shooting the film you got acquainted with Russian actors Ivan Okhlibystin and Pyotr Mamonov. What impressions do you have from communicating with them?

- Russian people impress me with their depth. They differ from the American model of thinking I've gotten used to. Russian and Japanese people have very close spiritual foundations, our hearts are similar. The reason for it is in your history, your culture focuses on human soul. There is no such thing in American culture. When I say it I don't want to offend Americans. They are also very good people. But it is impossible to become people with a truly deep soul in 400 years. I was surprised to learn that Ivan Okhlobystin is a priest. I realized that a Russian person is so multifaceted and unlimited that I wanted to become as close as possible to this culture.

- What holy places did you manage to visit while participating in the movie and its premiere?

- I managed to visit New Jerusalem and it impressed me very much. I saw with my own eyes how important for a Russian person are holy shrines, how deeply you respect your faith. Now I understand why the whole world respects the Russian people. People with such a heart and such a soul cannot but cause admiration.

I wish you always to be yourselves, to be faithful to your culture and Orthodoxy. It makes you extremely strong people. 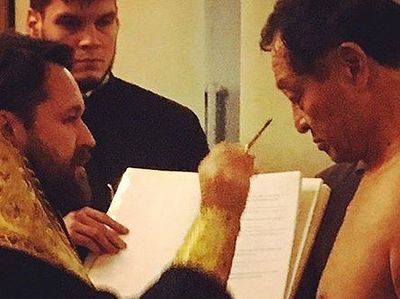 Mortal Kombat’s Shang Tsung Goes Orthodox in Russia The soul of Cary-Hiroyuki Tagawa, best known for the part of evil sorcerer Shang Tsung in the Mortal Kombat movies, has been captured by Russia – he has apparently decided to be baptized into the Orthodox Church.

A Life Changed by Icons

A Life Changed by Icons OrthoChristian.com correspondent Vasily Tomachinsky recently travelled to Boston, where he became acquainted with Clifford Isaac Gardner, Senior Administrative Manager of Research in the Division of Nephrology at the Massachusetts General Hospital and member of a number of refugee humanitarian relief missions in the Middle East. Isaac, once a Southern Baptist, is now a parishioner of the Holy Resurrection Orthodox Church in Boston. He tells Vasily about his journey to the Church through icons. 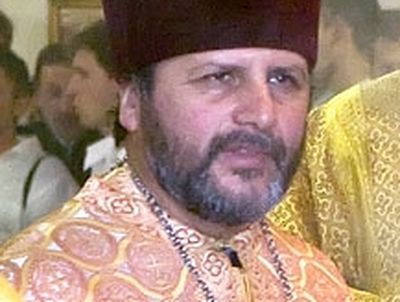 Opening a Door for the Lord in People’s Hearts An interview with Archpriest Alexy Aedo (Chile) Father Alexy Aedo, Chilean native and archpriest with the Russian Orthodox Church Abroad, is the pastor in Chile of two Orthodox communities — that of St Silouan of Mount Athos in the city of Conception, and that of St Nectarios of Aegina in the city of Santiago.
Комментарии