St. Arsenie Boca and His Revelation 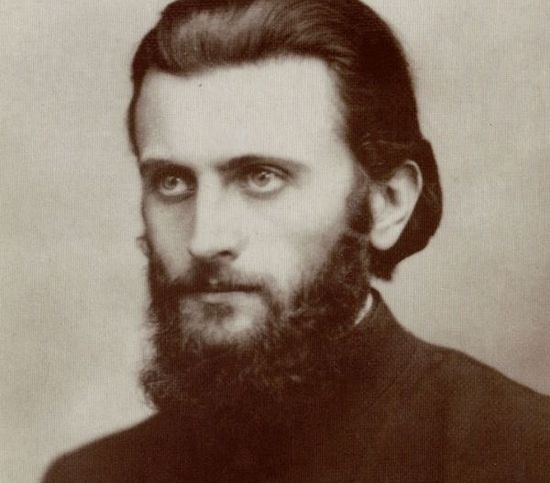 St. Arsenie was born in 1910 in a small village in Romania to pious Orthodox parents, Joseph and Christina. When his mother was pregnant with little John (his baptismal name) she dreamed repeatedly that either the sun or the moon shone on her stomach. She thus often wondered what kind of a child was that would be born.

While St. Arsenie was young, his father passed away and his mother was forced to remarry. This second marriage troubled her son John immensely and he thus stayed away from home for a long time. He eventually joined the brotherhood of the St. Constantine Binkoveanou monastery whereby he patiently cultivated his spiritual side. He was enlightened by the Grace of the Holy Spirit and acquired the gift of foreseeing the future.

St. Arsenie became renowned for his abilities as a confessor and a spiritual guide. When he met a person, one felt that the saint had the ability to enter and examine the depths of that person’s soul. He was able to reveal your thoughts and many past sins or deeds. He would also know a person’s name upon meeting them and without any prior knowledge. Once he was ordained and received the blessing to confess, he would frequently reveal the unconfessed sins (forgotten or not) to those who came to him, as well as things that would happen to them in the future. 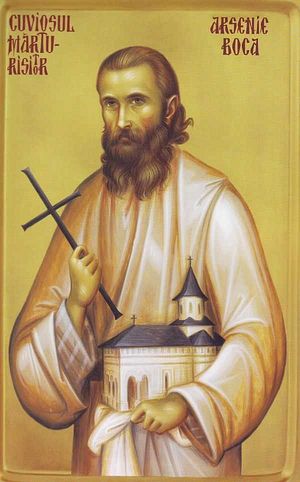 He was extremely bothered and concerned about the many people he confessed who refused to change their life, choosing to continue satisfying their desires. St. Arsenie was fully aware that, in the Day of Judgment, he would be their guarantor for the salvation of their souls. He thus begged and pleaded with God to reveal to him the reason for which people refuse to abandon their sinful ways.

One day, while he was sitting in a chair within his garden staring at the mountain across from him, he observed that a huge dark cloud appeared on the mountaintop. There was great commotion and noise coming from within the cloud. Continuing to attentively stare at it, he suddenly observed that the cloud separated in two and at the very peak of the mountain there was a royal throne surrounded by fire. On the throne was seated the Enemy of mankind, Satan, surrounded by a plethora of demons. St. Arsenie was able to clearly follow what was transpiring. He thus heard the Evil One say:

“Which one of you is skillful and clever enough to come up with some kind of a cunning and wicked thought which we will whisper in the minds of people so that we can attract them and draw them to our side? In this way we can establish a kingdom that is greater than God’s since there is so little time left...”

A demon then appeared who worshipped his leader all the way to the ground and said:

“Excellent leader of the darkness, I consider it proper to whisper into people’s ears that there is no God.”

“Your wickedness is not the best because we can gain a greater number of souls in a different way. Let somebody else come up with another idea.”

A second one came and said:

“Excellent leader of the darkness, I suggest that we whisper to them that there is a God but there is no such thing as Heaven or Hell and that this life of theirs simply ends at their grave.”

“This wicked thought is also insufficient and will not enable us to win many souls. People will remember that Christ said, as He ascended into Heaven: In my Father’s house are many mansions: if it were not so, I would have told you. I go to prepare a place for you. And if I go and prepare a place for you, I will come again, and receive you unto myself; that where I am, there ye may be also (Jn 14:2-3). The faith of people in these words is unfortunately strong enough to counteract our plans. People will continue to believe that He will reward all according to their life deeds. Let another one of you suggest something else.”

A third one then came up and after he worshipped his leader all the way to the ground, took the floor and said:

“Most excellent leader of the darkness, I propose that it is much better that we praise people for their faith in God, their belief in the existence of Paradise and Hell, their expectation for the Last Judgment. However and at the same time, let us whisper to them: ‘Do not rush into repentance. Let repentance be your deed during the latter part of your life. Death is still far away. For the time being, enjoy your life, satisfy all of your carnal desires because you have plenty of time left.’ Thus, while we conduct our alluring and magic works, they will grow old without realizing it and reach their life’s end before they can repent. Death will arrive suddenly and will find them unprepared and they will be ours forever.”

Satan then moved his head acknowledging his satisfaction. He grunted and squealed with devilish joy and with hasty anxiety told them all: “Quickly, all of you go and do exactly as your colleague indicated.”

It is for this reason that people fulfill their Christian duties in a lackluster manner. The cunning demons, throughout their life, whisper to them in a tempting way regarding the joys of this world and people obey. They refuse to change their ways and continue to satisfy their desires and sinful nature, ignoring the advice of the Church regarding true repentance, even in their old age…

St. Arsenie foretold his end by informing many that he had three more Paschal seasons to celebrate and indeed, he fell asleep in the Lord three years later. He had foreseen the fall of the Communist establishment and the rise of the Romanian people against the atheist regime, and quickly after this prophecy he fell asleep in November 1989 (the Communist regime fell one month later, in December 1989). He has remained in the souls of many of his spiritual children, continuing to guide them from above. 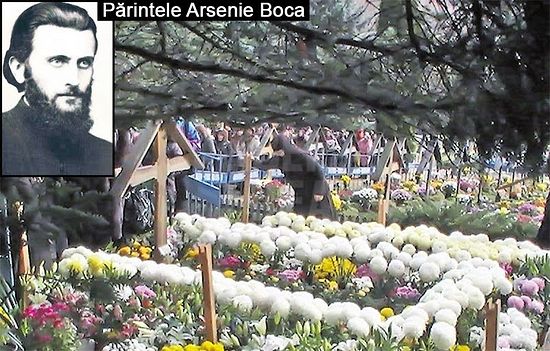 The grave of St. Arsenie Boca, surrounded by multi-colored and fragrant flowers that blossom year-round.

There exists a miraculous event that attracts thousands of Christians to his gravesite, at the Prislop women’s monastery. Even though the temperatures there can be extremely low, often reaching 20 degrees Celsius below zero, all of the flowers that have grown on his grave neither wither nor freeze and die by the extreme temperatures but instead remain in full blossom. From winter to summer, the Saint’s grave remains full with blossomed, multi-colored fragrant flowers.

May the prayers of St. Arsenie, this notable, tireless and remarkable servant of God be with all of us sinners! 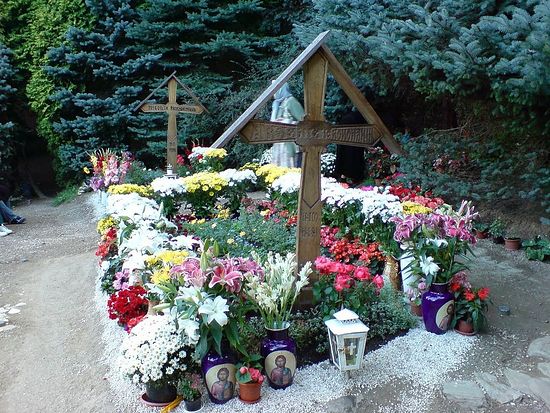 The grave of St. Arsenie Boca, surrounded by multi-colored and fragrant flowers that blossom year-round.

From: Saint Philotheos of Paros, Issue 9, Sept.-Dec. 2003, pg. 91. Translated from the Greek by St. POIMEN Brotherhood 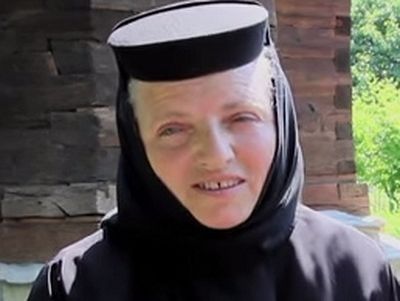 Behind the Monastery Walls
Romanian documentary with English subtitles

Behind the Monastery Walls
Romania’s monasteries are known worldwide for their magnificent beauty, but what do we know about the people that live there?

A portrait of elder Arsenie (Boca) is “weeping” in Vaslui, Romania
Residents of the Romania’s Vaslui county are convinced that late Hieromonk Arsenie (Boca; 1910-1989, a prominent elder and confessor) is truly working miracles.

Mozaicon. Vibrant Romanian Mosaics
Mozaicon was started by a group of Romanian fresco artists who came together in 2008 to create the mosaics for the Patriarchal Cathedral Complex in Bucharest.
Комментарии

Clifford McRoberts21 апреля 2017, 00:00
To better clarify my last comments/question. Whenever the messengers are discussing a topic and mention human names in the same sentence it is always about a topic involving humans of the same time period. Since I know from the bible that Mosses (in body) died thousands of years ago, was there another human named Arsenie that lived in the time of Mosses. Thank You, God Bless You. Cliff

Clifford McRoberts20 апреля 2017, 22:00
I am not a very religious person, I very much believe in God and I do consider myself a Christian (Baptist). I have not been involved in or gone to a church service in over 40 years, I’m 64. Lately I have been receiving messages from a race of beings that are here to help us fight an evil race of beings that are fighting them and others for our souls. They call the evil race “the fallen ones”. The messages are one way, in other words if I ask questions they don’t seem to hear me, they just keep talking. (I don’t want to go into that here.) The reason I’m posting on this sight is, Last night when they were talking about time travel, they said “Moses and Arsenie loved time travel”. I have never heard of Arsenie. My Google search brought me here. Can someone please post to help me learn more about this man? They only mention names of humans they consider very special and important to this fight.

Sinziana 8 января 2016, 00:00
His baptismal name was actually Zian, not John. A very old, Romanian name that has met great popularity lately, because of blessed Arsenie. Great article! Thank you and God bless! :)