Sts. Marina and Kyra, nuns, of Beroea in Syria 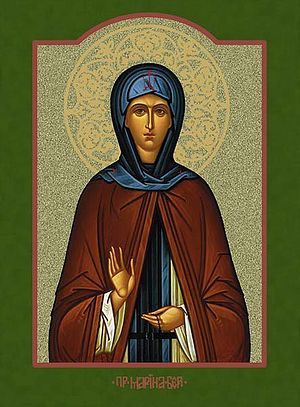 St. Marana (Marina)
Saints Marana (Marina) and Kyra, sisters by birth, lived during the fourth century in the city of Veria (or Berea) in Syria. Their parents were illustrious and rich, but the sisters left home and departed the city when they had reached maturity.

Having cleared off a small plot of land, the holy virgins sealed up the entrance to their refuge with rocks and clay, leaving only a narrow opening through which food was passed to them. Their little hut had no roof, and so they were exposed to the elements.

On their bodies they wore heavy iron chains and patiently endured hunger. During a three year period, they ate food only once every forty days. Their former servants came to them, wanting to join their ascetic life. The saints put them in a separate hut next to their own enclosure and they spoke to them through a window, exhorting them to deeds of prayer and fasting. 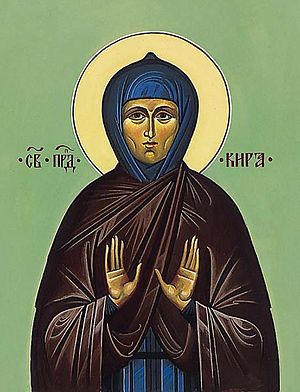 St. Kyra
The life of the holy ascetics Marana and Kyra was described by Bishop Theodoret of Cyrrhus in his RELIGIOSA HISTORIA. Out of respect for his hierarchical dignity, the holy virgins allowed him into their dwelling. Theodoret conversed with them and persuaded them to remove the heavy chains they wore under their clothing. Kyra, who was weak in body, was always stooped under their weight and was unable to sit upright. Once he left, however, they resumed wearing the chains.

So they lived in asceticism for forty years. They disturbed their solitude only to make a pilgrimage to Jerusalem to pray at the Sepulchre of the Lord. During their journey (which took twenty days) they ate no food until they had prayed at the Holy Places. On the way back, they also went without eating. They did the same thing at another time, when they journeyed to the grave of the Protomartyr Thekla (September 24) at Seleucia, Isauria.

Sts Marana and Kyra died in about the year 450. Their ascetical life equalled that of the great male ascetics of the desert, and they received the same crown of victory from Christ the Savior.