Divine Grace Is the True Food 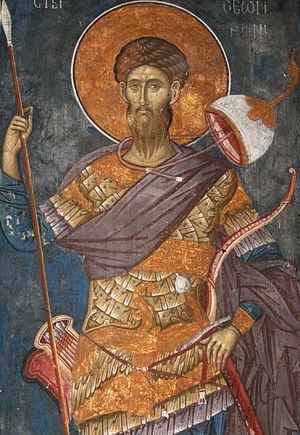 Great Martyr Theodore the Tyro. Photo: Pravoslavie.Ru
In the Name of the Father, and of the Son, and of the Holy Spirit.

Having spent the first week of Great Lent, today, on its first Saturday, we are celebrating the feast day of one martyr, one of the thousands, millions of warriors of Christ who suffered martyrdom for the Name of the Lord and carried this faith in their hearts to the end, who shed their blood and thus consolidated the faith of Christ. Today the Church particularly commemorates Great Martyr Theodore the Tyro. This Saturday is even called “the Saturday of Theodore the Recruit” in the honor of this saint.

This feast is the commemoration of one special event associated with Emperor Julian the Apostate, who came to power after the pious rulers that had given Christianity legal rights, had recognized it and eventually made it the state religion. Emperor Julian apostatized and then resumed anti-Christian persecution. However, this time the persecution was not explicit but insidious. Knowing that Christians were zealously praying and keeping a strict fast during the first week of Great Lent, preparing themselves for receiving the Body and Blood of Christ, for a meeting with the Lord, he compelled the ruler of one city to do the following: to take all food and drink from the markets and stores and to replace them with food and drink defiled by the blood of animals which had been offered in sacrifice to idols. The emperor meant to profane Christians who, unaware of this, would unintentionally consume that unclean blood, that sacrifice to idols. But Great Martyr Theodore the Tyro appeared to the bishop of this city in a vision and commanded him to tell the Christians, the faithful children of God, not to do that on the following day. Seeing that their wicked plot was exposed, the emperor and the city’s ruler couldn’t do any harm to the Christians. Theodore the Tyro also suggested to the bishop that the Christians eat koliva instead—a dish made from grains of boiled wheat. Thus this tradition established itself in the Church in commemoration of St. Theodore’s miracle.

As for Great Martyr Theodore, he became famous for his zeal and his special hatred for idols and idol worship. As a soldier, serving in the emperor’s army, he once refused to go and worship idols after his conversion to Christianity. More than that, he entered a pagan temple and practically destroyed it, smashing the pagan altar and all the “sacred” idols inside it. After that he was tortured, thrown into prison and finally put to death.

Physical food and drink are vital in people’s lives, yet spiritual food is much more significant. The enemy of mankind, trying to tempt Christians and make them worship him, often works very slyly and craftily in this world; this is the way he deceives people. Through any kind of food, information, or energy that are present in this life, whether they are physical or spiritual by nature, over and over again the devil tries to “palm off” this profane idolatrous blood on us. He is spoiling and poisoning everything around us. Not seeing and knowing this, we are often completely won over by these false gods, idolatry, money, vainglory, lechery… It seems that all of this already permeates the whole life of each of us Christians, along with our friends and relatives nowadays. And we are suffering ourselves from this profanation, from these lies, from this poison that is constantly invading our lives and souls.

That is why the Holy Church is preparing us so thoroughly and has given us these blessed days for the purification of our souls in vigil, prayer and fasting, so that the grace of God could work in our hearts in a particular way, so that we could see the true meat and drink and, at the same time, the filth that leads us to death, the diabolic bane, the poison of sin.

Today many people come to the Church guided by the grace of the Lord, and priests who hear confessions especially note this fact. A great number of people who had no time or strength to come to the Church in earlier periods of their lives are coming to the House of God now. And we see how the Savior is visiting their hearts in a particular way. These people come and, as a rule, seek for something that they call “healing”. We have seen it in the today’s Gospel reading twice. At first people were crowding around Christ, a huge throng was pressing Him, all were seeking for healing. And later we see that Jesus Himself healed a man with a shriveled hand. We frequently complain in our churches, including our Sretensky Monastery, that very many people come to Confession, too many people gather at the church. But, on the contrary, it should be a great spiritual relief for us, especially when we recall those people crowding around Christ. And that is a special mercy of God for all of us.

And so, these people come and seek for some healing. But intuitively they feel where the salvation and solution to simple life problems can be found, though they still don’t understand, they haven’t yet realized what is the purpose of life, what is the meaning of the true meat and drink for human life. Divine grace is indeed the real meat and drink for all of us. If we deprive ourselves of this grace, then anything else that we will achieve and acquire in our life will have no meaning—it will only lead us further and further away from our salvation and Christ, from communion with God. Divine grace heals everything, fills all things with meaning, corrects all, nourishes all, and vivifies everything in our lives. It is these holy days that the awareness of this again and again comes even to those Christians who have lived in the Church for many years. This is why the Lord gave us Great Lent.

Fasting consists not only in abstaining from certain kinds of physical food and drink, but, first of all, fasting is our chance to grow spiritually, to become stronger and closer to Christ, to receive the grace of God. So today is a wonderful day, the celebration of victory, and we together with Great Martyr Theodore the Recruit are celebrating the victory over these idols. Every one of us has a little victory of his own today. But the main thing is to remember that it is only the very beginning of our battle, the beginning of our path. We must be very watchful lest we fall and suffer a defeat, as is often the case following the first week of Great Lent. We shouldn’t keep blindly reveling in our victory and resting on our laurels. Instead of doing that, we as soldiers of Christ must cherish this grace, keep it in our hearts, bring it to this world, and we must be very vigilant so that the evil one cannot draw nearer to us and do harm to our souls. Amen. 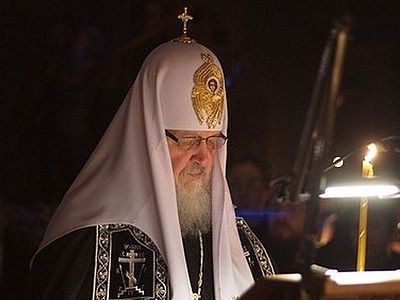 A Time of Healing
Words from Patriarch Kirill on Great Lent 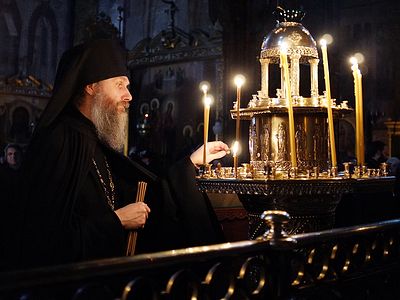 “If any fast is a joy, then the Great Fast is a great joy”
Deacon Valery Dukhanin

“If any fast is a joy, then the Great Fast is a great joy”
Orthodox Pastors at the Beginning of Great Lent
Deacon Valery Dukhanin
The Fast is always the possibility to become better, to conquer ourselves, to conquer our bad habits, organize ourselves for spiritual life. If the time of the fast did not come, we would just go on spinning like hamster in its wheel in our earthly affairs and rarely remember any kind of repentance. 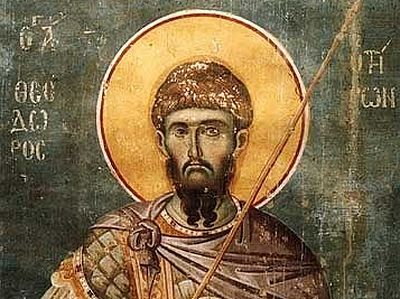 Saturday of the First Week, and the Sweetness of Boiled Wheat

Saturday of the First Week, and the Sweetness of Boiled Wheat
Fifty years after the death of St Theodore, the emperor Julian the Apostate (361-363), wanting to commit an outrage upon the Christians, commanded the city-commander of Constantinople during the first week of Great Lent to sprinkle all the food provisions in the marketplaces with the blood offered to idols. St Theodore appeared in a dream to Archbishop Eudoxius, ordering him to inform all the Christians that no one should buy anything at the marketplaces, but rather to eat cooked wheat with honey (koliva).
Комментарии
×