From a Homily on Great Thursday. The Holy Mysteries of Christ 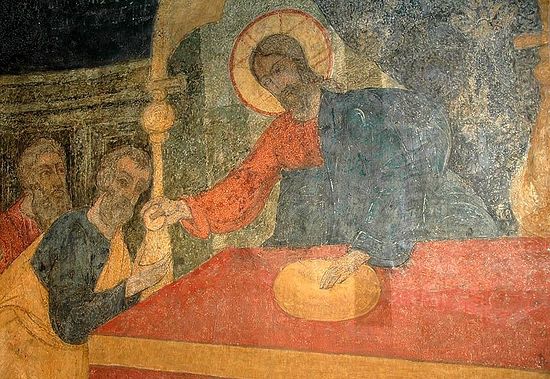 The Apostles receiving Communion. Fresco in the Cathedral of the Vladimir Icon of the Mother of God, Sretensky Monastery, Moscow.
Bread strengtheneth man's heart (Ps. 103:17), the prophet foretold of a certain miraculous bread, which, unlike ordinary, material bread that strengthens the body, is to strengthen man's heart. Our heart is in need of strengthening! It was frightfully shaken when we fell, and cannot by itself stop wavering. It is continually shaken by various passions. Fallen man in his blindness preaches to no purpose and in vain about the firmness of human will. There is no firmness: it is drawn along by the force of the sins that overcome it. Needed, much needed is this prophesied, miraculous bread in order to strengthen the wavering, weakened heart of man.[1]

That bread which came down from heaven (Jn. 6:58, 48) makes the heart of man strong. This bread is our Lord Jesus Christ. He said, I am the living bread which came down from heaven: if any man eat of this bread, he shall live forever: and the bread that I will give is my flesh, which I will give for the life of the world. He that eateth my flesh, and drinketh my blood, dwelleth in me, and I in him (Jn. 6:51–56).

What a wondrous institution! The mind of man is perplexed at such a supernatural, unfathomable institution. The people who heard this being instituted were darkened by their carnal mindedness and unbelief, did not wish to accept an explanation from God about the Divine institution, and pronounced their own judgment upon it, to their own condemnation and destruction. This is an hard saying, they said, who can hear it? (Jn. 51:60). From that time many of his disciples, who in vain bore the name, disciple, went back, and walked no more with him (Jn. 6:66). Even now, doubt arises about this great Mystery amongst those who only bear the name Christian, who observe external Christian practices, but their by their lives and the desires of their hearts, they are alien to Christianity. The saying would be hard if a man had pronounced it; obedience to the saying would be impossible if a man had said it. The saying was pronounced by God, Who out of His infinite goodness had taken on humanity for the salvation of people—therefore the saying must be filled with goodness. The saying was pronounced by God, Who had taken on humanity for the salvation of people, and therefore attention to the saying and judgment of it should not be superficial. Obedience to the saying must be accepted with faith, from the whole soul, as God Who became man must be accepted. God's assumption of humanity is unfathomable for people; just as unfathomable are the institutions and actions of the God-Man; they make man, conceived in iniquities and born in sins—man, condemned to eternal death and eternal torment in the prisons and abysses of hell—like unto God, make him god by grace, raise him to heaven for eternal habitation, and for eternal blessedness in heaven. Whoever judges the saying and institutions of the God-Man and deny them, have judged and denied the Word—the spirit and life (Jn. 51:63), judged and denied the institution that is given to the disciple of Christ's spirit and life. Verily, verily, I say unto you, said the Lord, except ye eat the flesh of the Son of man, and drink his blood, ye have no life in you (Jn. 51:53).

"It is meet to learn," says St. John Chrysostom, "the miraculous quality and effect of the Holy Mysteries: what are they? For what reason are they given? What benefit comes from them? We are of one body with the body of our Lord Jesus Christ; we are flesh of His flesh, and bone of His bone (cf. Gen. 2:23). A mysterious teaching! Heed what is said: We are united to the all-holy flesh of the Lord not only through love, but also through the sacrament itself. The all-holy flesh of the Lord becomes our food! He gave us this food, wishing to show the love that He has for us. He has mixed Himself with us, and has mingled His Body in us, so that we might be united with Him as the body is united with the head: thus is the quality of this unspeakable love. Prefiguring the Lord with himself, Job said of his servants by whom he was especially beloved, that they expressed their great love for him by saying, Oh that we might be satisfied with his flesh! (Job 31:31). Christ has given this to us, leading us to exceedingly great love, and showing His love for us, allowing those who wish it not only to see Him, but also to touch Him, to partake of Him and unite with Him, and all our desires shall be fulfilled."[2] The Lord has replaced with Himself our forefather Adam, from whom we are born in death, from whom we are born to die. He is made our forefather, exchanging the flesh and blood we inherited from Adam for His own flesh and blood. Such an act of the Lord, at the pious contemplation of the redemption of people by God's becoming man while yet remaining unfathomable and supernatural, also becomes clear and natural. The vile flesh and blood of our fallen and outcast nature must be replaced by the nature that the God-Man has renewed; by the all-holy flesh and blood of the God-Man.[3]

God fed His chosen people, the Israelites, with manna that fell from heaven, when they were journeying through the desert from Egypt to the Promised Land: And bread of Heaven did He give them. Man ate the bread of angels (Ps. 77:27–28; John 6:32). Christ has been transformed into this bread, feeding with His word (cf. Mt. 4:4), His Body and Blood, Christians who wander in the land of exile, traveling and ascending into the homeland on high, through many and various obstacles, sufferings, and hardships. Egypt symbolizes the state of man's fall, the state of slavery to sin and to fallen spirits. The journey from Egypt depicts the rejection of a sinful life, the acceptance of faith in Christ, the entry into a life according to Christ's commandments. The promised land is heaven; the journey through the desert is earthly life; the heavenly bread is Christ. For the bread of God is he which cometh down from heaven, and giveth life unto the world (Jn. 6:33). Your fathers, says Christ to the new Israel of the old Israel, did eat manna in the wilderness, and are dead. This is the bread which cometh down from heaven, that a man may eat thereof, and not die (Jn. 6:49-50) the eternal death—not during earthly life, and not at the separation of the soul with the body at the body's the death. Amen.