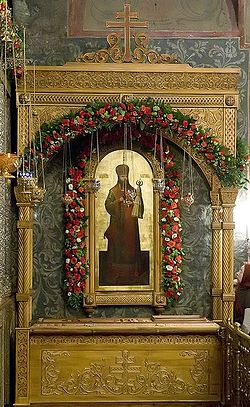 The reliquary of New Hieromartyr Hilarion (Troitsky), Sretensky Monastery, Moscow
Listen to the triumphant chants of the Church! Not only on the days of Holy Pascha, but on all the great feasts, you often hear the word, "incorruption." The whole matter of salvation of the human race is expressed in living Church theology as the gift of incorruption. It means that we need incorruption. We are in a state of corruption. The synaxarion for the Holy and Great week of Pascha [Bright Week] is of course only read in monasteries, and not even in all of them. Meanwhile, the meaning of the events we celebrate during this week is described thus: "Then He came down from the heavens and made His dwelling in the womb of the Virgin; now He has stolen human nature from the treasury of hell, raised it to heaven, and brought incorruption—man’s ancient inheritance." There are two remarkable details here: Pascha is positioned next to the events of the Nativity of Christ, and corruption is called the ancient inheritance.

When you hear the chants in Church, you become more and more convinced that they are truly rich in a treasure of ideas, and are greatly important for a truly Orthodox understanding of life today. Our dogmatics courses taught in the theological seminaries and academies are in this respect on an immeasurably lower level than that theology taught to the faithful by our readers and chanters from the church cliros.

Pascha of incorruption… The ancient inheritance is returned… Our seminary theology talks about some legal accounts between God and man. Sin is called for the most part a crime against God, an offense against God, for which God’s justice must take revenge against the despicable offender. But the Church first of all calls sin corruption, the loss of our ancient inheritance: incorruption. In this there are no legal accounts to settle with the Lord God. Man fell away from God, and his spiritual and physical corruption began. Self-rule in spiritual life led to slavery to sin and passions. Man began to decay in seductive passions. The soul rots and decays. This may sound strange, but that is really how it is. The process of spiritual corruption can be compared to any kind of decay. If an organism decays, everything breaks down in it, and with time, poisonous and foul smelling gases rise from it. It is the same with spiritual nature that has been harmed and infected by sin, which is as if rotting. The soul loses its chastity, its integrity, and decays; its will is weakened, along with everything connected with it and everything subject to it. Passionate thoughts and evil deeds continually break forth from the sinful soul. Anyone with an attentive relationship to his own spiritual life would not be surprised at how difficult it is to instill all that is good and beautiful into the soul, and how easily and quickly everything dark and evil takes root and grows in it. Therefore, wouldn’t we say that there is something bad living in our soul? Our soul is not healthy, it is sick. Corruption reigns in our soul, and our body is quite obviously subject to corruption. Many do not notice their spiritual sickness; they stifle the inner groaning and cry of the soul with the noise of life. But death and bodily decay are irrefutable, and all life’s vivid color pales before this decay. They can reject the works of the ascetics who expound upon spiritual death, and perhaps even laugh at them. But find me a nihilist who could not understand the funeral services and St. John Damascene’s lamentation over the grave!

Humanity has always seen the inner corruption of its spiritual nature, and has always beheld with its own eyes the destruction of the temple of its body. To admit that you are spiritually rotting and to know that your body is the inheritance of worms—that is the lot of sinful man! Where is the joy? What can we hope for in the future? Sin is essentially linked with unhappiness and suffering. Sinful awareness paints the future in dark, joyless colors. The Hebrew Sheol, the kingdom of shadows in the murky Hades of the Hellenes and Romans—both depict a disconsolate future.

Salvation is healing. Salvation is freedom from corruption. Salvation is a return to the original goodness of incorruption; for man was created in incorruption. Needed was the restoration to health of human nature. This restoration is given in the incarnation of the Son of God. “We could not have become incorrupt and immortal, had not the Incorrupt and Immortal One not been first made what we are.” The Incorrupt and Immortal One, in His unity of persons, has assumed “the corruption and death of my stolen nature.” The nature of corruption received the inoculation of incorruption, and the process of creation’s renewal, the process of man’s deification, has begun, as has also begun the creation of god-humanity. The sting of death has been blunted. Corruption is conquered, for the antidote for the illness of corruption is given. All those born of earth have inevitably come to those gates of death and hid behind them, trembling with horror. But now, Christ is resurrected! What does this mean? This means that salvation is truly wrought. For, human nature has joined with Divine nature in the person of Christ, “unmingled, unchanged, undivided, and inseparable.” It is not God Who has passed through the gates of death, and not before God were the “eternal chambers open wide,” not for God’s sake was the stone rolled away from the doors of the tomb, but for the sake of the God-Man. Together with Christ, our human nature has passed through the mysterious gates of death. Death reigns, but not forever!

Death was terrible to the human race before Christ’s death, but after Christ’s resurrection, man became terrible to death, for One of us has conquered death; He did not remain in the tomb, and did not see corruption. Passover was the freeing of Israel from Egypt. Our Pascha frees us from the slavery of death and corruption. Christ is risen! I now know that my salvation is truly wrought. I know that God truly appeared on earth. There have been great people, conquerors of the elements, conquerors of nature; but death cut them all down and revealed our common nothingness. Who has passed through the doors of death? It can only be God. This means that God was truly incarnate on earth, truly brought the healing cure against the corruption that corrodes and torments me. Incarnation and resurrection are united into one. The incarnation gave meaning to the resurrection, and the resurrection irrefutably convinces us of its truth and reality as something that is not a phantom or a dream.

Now I am no longer frightened by death, for I have seen the victory over corruption. I also see a different law other than the law of life working in me—I see the law of death and corruption. I see how sin reigns over me at times. But I know that this reign has been shaken, that my situation is not hopeless. I can now hope for victory, I can hope to overcome sin, I can hope for freedom from slavery to corruption. Now I can look with joy upon the podvig of struggle with sin and passions, for the enemy has been conquered many times by ascetical strugglers. The saints of God shine in the heavens of the Church like stars—those who lived on the earth, conquered sin, attained purity and chastity, which is incorruption, and therefore departed rejoicing upon the way of all the earthly. Incorruption, that is, purity and chastity, gives joy. Blessedness is not an external reward, as unfortunate Catholic hirelings reason with their minds. Blessedness is the inner consequence of virtue. Virtue is a healthy soul, and a healthy person is always happier than a sick one. My sinful illness is curable—the resurrection of Christ convinces me of this. To me is opened the blessedness of paradise. Let no one lament his poverty when entering the Kingdom of all! Joy has come to all, because hope for incorruption, for redemption from sinful corruption, has also come. Christ God has brought us out of death into life. Egypt is left behind, Pharaoh has perished, and the Promised Land and incorrupt Kingdom lay ahead—where there are many abodes, and where the rejoicing is endless! Pascha of incorruption! Salvation of the world!