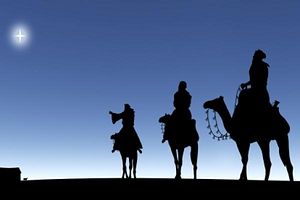 I have read the Gospel according to Matthew many times, and suddenly I took note of the first two lines of the second chapter. How could the Magi come from the east to a star that they saw in the east? The Magi should have either come from the west to the star from the east, or the star should have been in the west; or perhaps something else is meant. Please explain. —Yuri

For we have seen his star in the east, and are come to worship him (Mt. 2:2). The question arose because of a syntactical particularity of the citation. The word east relates not to the star, but to the magi: For we have seen his star [located] in the east, and are come to worship him. The star was not an astronomical phenomenon, but an “invisible power, which took the form of a star” (St. John Chrysostom), “a divine and angelic power, which appeared in the image of a star” (Blessed Theophylact). St. John cites the following concepts in support of this: 1. Its path was not ordinary: it moved from the north to the noon (the south). It led the magi from Jerusalem to Bethlehem, which is located further south. 2. It appears not at night, but during the day. At night, the star was not seen. 3. The star appears, then hides, and then appears again. 4. The star shows the place not from the heights, but descends to it; an ordinary star cannot show such a place as a manger.

There is yet another explanation of this line. The Greek word anatole and the Slavonic vostok have two meanings: 1. The light side, and 2. The sunrise, the source. With this explanation, the line could be read as: “we have seen the rising (source) of His star.”

Please forgive my ignorance, but I have a question. In the promise, the Lord said that the Savior will appear to the world from the lineage of David. In the Gospels is given a detailed genealogy of Joseph, the betrothed of the Holy Virgin, who really was a descendant of David. But Joseph was only Christ’s stepfather. I have heard one version that the Most Pure Virgin herself also came from the lineage of Judah, because according to the law, all marriages had to be within one’s own tribe. But… Righteous Elizabeth, the mother of St. John the Forerunner, is called in the Bible a relative of Mary, and also cited as a daughter of Aaron. Does this mean that Jesus did not come from the tribe of Judah? Resolve my doubts. The Lord save you! —Daria

According to Church tradition, which St. Dimitry of Rostov relates, the father of the Virgin Mary, Righteous Joachim, traced his lineage to David, however not through Solomon, but through his brother Nathan, who was born also of Beersheba (2 Kings 5:14; 1 Chron. 5:14; 14:4). Nathan is recalled as an ancestor of Jesus Christ in the Gospel of St. Luke: Which was the son of Mattatha, which was the son of Nathan, which was the son of David (Lk. 3:31). Since the Evangelist Matthew names not Nathan, but Solomon, scholars consider that in the Gospel of St. Luke the lineage of the Savior is given according to that of His mother. At the end of the genealogy Joseph is cited, because the genealogy is given according to the male line, while the mother could not be shown as a link in the chain of inheritance.

The Holy Mother of God and St. Elizabeth were cousins on their mother’s side. The mother of the Mother of God, Righteous Anna, descended from the tribe of Levi, the lineage of Aaron. She was the daughter of the priest Matthan. His wife was Mary of the line of Judah. They had three daughters: Mary, Sobe and Anna. “The first of them to marry was Maria in Bethlehem, and she give birth to Solomea; then Sobe married, also in Bethlehem, and gave birth to Elizabeth, the mother of John the Forerunner; the third, as we have already said, the mother of the Most Holy Mother of God, was given in marriage to Joachim in the land of Galilee, in the city of Nazareth” (St. Dimitry of Rostov. The Lives of the Holy and Righteous Joachim and Anna, September 9).

The law did not forbid marriages between members of different tribes. Thus, King Saul, who came from the tribe of Benjamin, gave his daughter Michal in marriage to David (1 Kings 18:27), who belonged to the tribe of the patriarch Judah. There was a limitation for a bride who was an heiress due to her absence of brothers. It was not allowed that land should be transferred from one tribe to another: This is the thing which the Lord has appointed the daughters of Salpaad, saying, Let them marry where they please, only let them marry men of their father’s tribe. So shall not the inheritance of the children of Israel go about from tribe to tribe, for the children of Israel shall steadfastly continue each in the inheritance of his family’s tribe (Num. 36:6–7).

Are the magi Caspar, Melchior and Balthazar canonized saints? I thank you in advance. —Denis

In the Orthodox Church there never was a special canonization of the magi who brought gifts to the Infant Christ, although their piety and love for the God-Child inspires the highest respect. In the Menalogian of Basil II (976–1025) on the day of the feast of the Nativity of Christ, this event is commemorated: the worship of the Magi. For Western Christians, the central event in the feast of the Theophany [or Epiphany] (January 6 according to the Gregorian calendar) is the remembrance of the appearance of the star to the eastern magi, or kings (according to European belief, they were kings) at the moment of Jesus Christ’s birth. Therefore, the feast of Theophany is also called Festum magorum (the feast of the magi), or Festum regum (the feast of the kings). The day of the Lord’s Baptism (Baptisma Christi) is celebrated on the first Sunday after the feast of the Theophany and closes the Christmas cycle. The names of the magi (Caspar, Melchior, and Balthazar) are first found in the work of Venerable Bede (672 or 673–May 27, 735).

We reliably know about the wise men who came to worship the God-Child only from the holy Gospels: And when they were come into the house, they saw the young child with Mary his mother, and fell down, and worshipped him: and when they had opened their treasures, they presented unto him gifts; gold, and frankincense and myrrh (Mt. 2:11). They came from the east (2:1). The use of the Greek word magoi means the Persian or Babylonian priests, wise men, and astrologers. It is impossible to say exactly what country the magi came from; most likely it was from Persia or Babylonia. The messianic expectations were known in these countries thanks to the Prophet Daniel, whose book was well known to the Persians as well as the Chaldeans.

Gradually, a large literary tradition formed on the theme of the magi. An insurmountable difficulty lies before scholars: separating the historical elements of this tradition from the legendary. According to tradition, they subsequently became Christians. They were baptized by the Apostle Thomas, who preached in Parthia and India. They became preachers of the Gospels. In Western tradition there is even mention of them being consecrated bishops at the hands of the Apostle Thomas. It is also said that their relics were discovered by the holy Empress Helen and placed in Constantinople. Later, under the bishop of Milan, Eustorgius in the fifth century, they were translated to Milan. At the present time, there is a gold reliquary containing their relics located in the Köln Cathedral.

The gifts that the magi brought to the Infant Christ were carefully preserved by the Mother of God. Before her blessed Dormition, she gave them to the Jerusalem Church. They were located there until the year 400. Later, the Byzantine Emperor Arcardius translated them to Constantinople and placed them in the Hagia Sophia church. In 1453, Constantinople fell. In 1470 the daughter of the Serbian ruler George Brankovich, Maria (Maro), who was the widow of the Turkish sultan Murat (Murada) II (1404–1451), gave the Gifts of the Magi to the Monastery of St. Paul, which was Serbian until 1744. Despite the fact that she was the wife of a sultan she did not accept Islam and remained a Christian until the end of her life. On the place were Maria knelt a cross was placed called the Queen’s. In the chapel that stands next to it is a depiction of the monks’s meeting of this great relic. There is a tradition that the pious Maria wanted to bring the Gifts of the Magi into the monastery herself but at the its walls she was stopped by a heavenly voice as once was the Empress Placidia at Vatopedi, reminding her that the Athonite rule forbids women from entering the monastery.

The Gifts of the Magi are reverently preserved in the monastery in small reliquaries: twenty-eight small rectangular gold wafers, a tetragon and a polygon, decorated with elegant filigree ornaments. This is the gold that the magi brought the God-Child as to the King. Besides this there are around seventy small olive-sized balls of incense and myrrh. These relics are very fragrant. Demoniacs have been healed by them.

When in history did the use of “BC”—before Christ, and “AD”—Anno Domini come about? —Irina Solovieva.

The reckoning of years from the Birth of Christ was introduced in 525 by the abbot of a monastery in Rome, Dionysius Exiguus. Before this, in the Roman Empire and in the first Christian centuries, reckoning of years began from August 29, 284 AD—from the beginning of the reign of Emperor Diocletian (around 243–313 AD). Romans called this the “era of Diocletian”. With the victory of Christianity, this reckoning began to be called the era of the martyrs, since Diocletian was a cruel persecutor of Christians.

Dionysius Exiguus was a Scythian by nationality. He was a scholarly monk, knew the Holy Scriptures well, and was knowledgeable in both Latin and Greek. He compiled a collection of canon law, which the Western Church used for a long time.

Can we pray for the reposed during the Christmas and Theophany period? —Valery Ustimov

During this period, prayers for the reposed are not pronounced at the divine services. Just the same, the prayer for the reposed are made during Divine Liturgy at the proskomedia and at home. St. Athanasius (Sakharov) comments on the typicon: “The Forefeast and Afterfeast of the Nativity of Christ and the Theophany differ from the forefeasts and afterfeasts of other of the twelve major feasts in that the Octoechos is not sung… The particular nature of these forefeasts and afterfeasts could not but have an effect upon the rule of commemorations during these days. The 169th canon of the Nomocanon in the Great Book of Needs notes that during the “tweve days… there are no commemorations, just as on Sundays and great feast days. Because the structure and character of the services from December 20–24 (here and below we mean the Julian calendar), fully correspond to the structure and character of the services on January 2–5, which are part of the twelve days, and the structure and character of the services on January 7–14 fully correspond to those on December 26–31, then it is clear that from December 20 through January 15 all prayers for the reposed are omitted, including common litias, although Vespers and Matins end as simple services” (Commemoration of the reposed according to the Typicon of the Orthodox Church, Chapter 2).

J Clivas 8 января 2016, 15:00
And today those who reject Christ's divinity want to change BC to "BCE" (before the common era) and AD to "CE" (common era). Christians ought to resist such machinations.