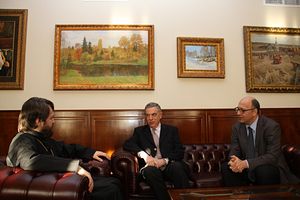 On January 30, 2012, Metropolitan Hilarion of Volokolamsk, chairman of the Moscow Patriarchate’s Department, met with H. E. Michael Spinellis, Ambassador Extraordinary and Plenipotentiary of the Greek Republic to the Russian Federation. They were joined in the meeting by Counsellor for Cultural Affairs of the Embassy of Greece, Dimitrios Yalamas.

Discussed were questions pertaining to the difficult socio-political and economic situation in Greece. Ambassador Spinellis expressed gratitude to the Russian Orthodox Church for its decision to participate, together with the Archbishopric of Athens, in arranging soup-kitchens for the disadvantaged sections of the population.