Martyr Evargrisi of the Shio-Mgvime Monastery 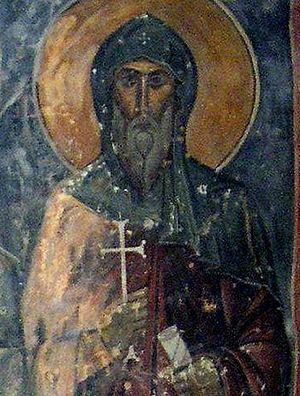 The Thirteen Syrian fathers arrived in Georgia in the 6th century, having received a blessing for their journey from the Most Holy Theotokos. They settled on Zedazeni Mountain, living an ascetic life of prayer and fasting. Their spiritual leader, Ioane, then sent them to perform good works throughout various regions of Georgia. The founding of many monasteries and the revival of monastic life in Georgia today are linked to the names of the Thirteen Syrian Fathers.

Saint Ioane sent one of his disciples, Shio, the son of a God-fearing Antiochian nobleman, to take up his abode in the nearby Sarkineti Mountains. By the grace of God, a dove brought food to Saint Shio in the deserted highlands where he labored.

A certain ruler, Evagre of Tsikhedidi, would often go hunting in the area where Saint Shio lived. On one of his excursions he happened upon venerable Shio and was so awed by his wondrous way of life that he decided to remain there with him. Saint Evagre gave up all his possessions and was found worthy to be appointed abbot at the time of Saint Shio’s death.

Saint Ioane remained on Zedazeni Mountain with only one disciple, the holy deacon Ilia. Fr. Ilia was a great consolation to Saint Ioane in his infirmities. Saint Ilia was also a great ascetic in his own right, laboring in prayer, fasting, and mortification of the flesh.

The mountain on which they lived was completely lacking water. Saint Ilia labored in the sweat of his brow carrying water from the Aragvi River, which flows around the foot of Zedazeni Mountain. Seeing the great ascetic labors of his disciple, Saint Ioane besought God with tears that He would supply them with a spring of water on top of this high mountain. God heard the prayer of His servant and a spring of delicious water began to flow.

Saint Ilia the Deacon often accompanied Saint Ioane on his travels. Fr. Ioane once took him to the monastery of Saint Shio, and Ilia the Deacon, as requested, presented Saint Ioane with a cup of wine in the refectory. The blessed Ioane made the sign of the Cross over the cup, raised it aloft, prayed to God, and left the cup suspended in the air. It remained where he had placed it, as if supported by an invisible hand.

One day Saint Ilia went to the spring to draw water. Glancing up he saw opposite him a bear of enormous size approaching the spring. Ilia was terrified and, leaving his bucket, turned and fled to the great schemamonk Ioane to tell him about the bear. Saint Ioane followed his disciple to the well and saw the bear drinking water. Saint Ioane meekly said, “Drink if you are thirsty and go away from here. But I tell you that henceforth, you and your kind shall never dare to cause any harm to anyone on this mountain.” Hearing the words of the saint and inclining its head like an obedient servant, the bear immediately left the spring. And to this day the animals continue to obey Saint Ioane’s command.

The holy deacon Ilia remained with Saint Ioane the rest of his life. The Georgian Apostolic Church beseeches the protection of the venerable Evagre, Ilia the Deacon, and all the blessed and pious elders who dwelt with the Thirteen Syrian Fathers and continued laboring in holiness to the end of their lives.