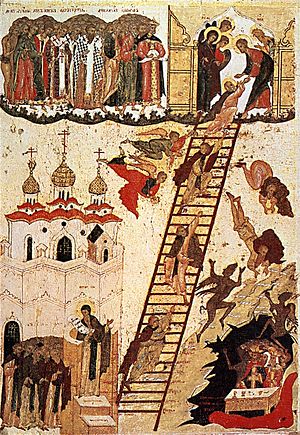 “Oh, if only I could / At least to some degree, / Write eight lines I would / About passion’s properties. / About the / transgressions and the sins, / The running and the chasing, / The hasty inadvertences, / The elbows, my palms”1—thus wrote Pasternak, aware that a precise, accurate word on the passions is difficult to give, and there can be few such words. Precise words on the passions slip out of your hands, like a wet and lively fish, and the passions themselves are interwoven together, knit together one with another, forming a repugnant unity. Obviously the word “passions” in the this case is used as a synonym for “disease of the soul,” and not as romantic longing or a noble fire in the blood.

That of which Pasternak confessed himself powerless was done long ago by Abbot John, called Climacus. This servant of God wrote not just eight lines, but an entire book on the passions and the battle with them. This book was born out of the experience of the struggle and victory, inasmuch as man, in his usual state, is found in backbreaking labor for sin, and, O woe!—he does not notice its evil. Only when man frees himself or begins to free himself is he given a view of himself from outside, and, therefore, the possibility of describing the process of inner healing.

This book is truly “about the transgressions and the sins, the running and the chasing,” and it begins with a chapter on the flight from the world. It’s the first of thirty rungs leading to Christ the King, and therefore it befits monastics in particular to read The Ladder. This book is also necessary for those remaining in the world and incapable of a full-fledged and irrevocable flight, but not as a handbook. It is necessary as an example of heavenly thinking while living in a fragile bodily shell. Perhaps, in Great Lent, when the marriage bed cools and is sanctified by abstinence, when there is no substantial difference between the food on the tables of monks and of the laity , a person not wearing a black robe, can read something from among the monastic books. To be engaged in such reading constantly and at all times can be dangerous for laity. The danger is that our lifestyle should correspond to our chosen reading. But if our books and our life differ, the soul bifurcates, suffering itself and inflicting suffering upon those around it.

So, not leaving the world in our body, we should be free from a worldly spirit to some degree. St. Symeon the New Theologian tells us that, “The world is neither silver nor gold, nor horses, nor mules, nor food, nor wine, nor bread. It is neither house, nor fields, nor vineyards, nor country homes. What is it? Sin, addiction to things, and passions.” If it is “the world which lies in evil,” then you can run, but you won’t get anywhere.

Climacus, for example, writes that zealous devotion in the world most often feeds upon vanity, as if upon some dirty and hidden runoff. It’s impossible to know anything about the spirit of a man, so long as he lives among people. A worldly analogy for such words can be the song advising, “Take some friends to the mountains.”2 Any situation, carrying a risk or unusual heaviness, that demands a sacrifice and brotherly cohesion and does not promise a reward of flowers and medals, shows who is who. “There you will understand, who is who,” the song says. And the words of the saint: “I have seen how in the world they planted many different plants of the virtues, which were watered by vainglory as by an underground sewage pipe, and were hoed by ostentation, and for manure were heaped with praise. But when transplanted to a desert soil, inaccessible to people of the world and so not manured with the foul-smelling water of vanity, they withered at once.”3

These are barbed words, such as is becoming of words of genuine wisdom. The words of the wise are as goads, and as nails fastened by the masters of assemblies, which are given from one shepherd (Ecc. 12:1). The horror of the final and righteous Judgment may be not so much in that we sinned, and sinned a lot, but in that even our best impulses and efforts were deeply poisoned by sin and are unworthy of blessed eternity. That’s where the real trouble is, and I don’t know where healing might come from, if not from those salted with the wisdom of words of spiritual experience. One of those having love in themselves said that the books of the saints are worthy of the same honor as the relics of the saints, and maybe even more.

It’s hard to find a man who does not suffer, at least sometimes, from wanton lust. The corruption of lust rules in the world says the apostle Peter, and we do not have to read a lot to confirm the validity of these words. But how to fight it? There is fasting and prayer, but either we don’t know their strength, or our sin is so strong that we do not feel free. You can run from the world, plugging your ears and closing your eyes. But temptation will follow you everywhere, because it has made its way into your memory and its poisonous sweetness has settled in your heart. Here Climacus gives us unexpected advice: “Eagerly drink scorn and insult as the water of life from everyone who wants to give you the drink that cleanses from lust. Then a deep purity will dawn in your soul and the divine light will not grow dim in your heart.”4

That’s how it is. You suffer in secret in your heart from the adulterous thorns for a day, two, and more. Then your boss suddenly summons you, and sullies your good name, blaming you for all real and imaginary shortcomings. Then the fornication will permanently depart from your soul, giving place to bitter resentment, and God thereby delivers you from the chasm at the edge where you were standing. The resentment will pass; resentment is not so dangerous.

The so-called “mind of salvation” is necessary for salvation, without which all our work risks turning out to have been a sowing on asphalt and plowing in the swamp. The praying fool from the proverb really does break his forehead doing prostrations, and besides this unnecessary trauma he obtains no other fruit. Therefore, the crystallized experience of the Church should be in demand by us, and we must find time to become attentively familiar with it, with persistence, so we don’t run in the wrong direction and don’t beat the air (cf. 1 Cor. 9:26).

The Ladder is not the Typikon; it has a different value. There are no prayer rules written there, no defined number of prostrations or amount of food to partake of. More important things are disclosed there, the effect of which is not revealed to the superficial gaze. In fact, the reading of such books is healing from blindness. And we ourselves, no matter how many years the Lord metes out to us, will never understand our inner life with such depth and clarity as did Abbot John of Mt. Sinai.

Books such as The Ladder can be read for an entire life and digested slowly, according to the measure of our practical effort. In them breathes that wisdom which is first pure, then peaceable, gentle, and easy to be intreated, full of mercy and good fruits, without partiality, and without hypocrisy (Jas. 3:17). nion with God, a livetc. , so when said about oursleves feel free.the be even more. . ideist, and hte rnce in the owrld..

2 “A Song About a Friend,” by Vladimir Visotsky

Mark Citadel27 марта 2017, 21:00
"That’s where the real trouble is, and I don’t know where healing might come from, if not from those salted with the wisdom of words of spiritual experience." Occidental man's need for a Brahmin class of true priestly virtue is desperate at this point. But he must generate such spiritual masters if he is to regain his way
×