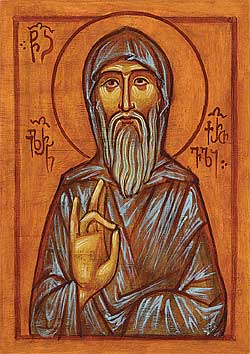 Saint Ilarion the Georgian was the son of a Kakheti aristocrat. There were other children in the family, but only Ilarion was dedicated to God from his very birth. Ilarion’s father built a monastery on his own land, and there the boy was raised.

At the age of fourteen Ilarion left the monastery and his father’s guardianship and settled in a small cave in the Davit-Gareji Wilderness. There he remained for ten years.

Soon report spread through all of eastern Georgia of the angelic faster and tireless intercessor in prayer. Crowds flocked to his cave to receive instruction, blessings, and counsel. When the bishop of Rustavi came to visit Ilarion, he ordained him a priest. Soon he was made abbot of St. Davit of Gareji Lavra.

After his ordination, the holy father was praised even more among his people, and he decided to leave his motherland. Ilarion chose one of the brothers to replace him as abbot of the monastery and set off on a pilgrimage to Jerusalem.

On the way Venerable Ilarion was attacked by a band of vicious thieves. They sought to kill the holy father, but their hands suddenly withered. When the terrified thieves realized that God had punished them for raising their hands to kill the saint, they fell to their knees before St. Ilarion and begged his forgiveness. The venerable father blessed them with the sign of the Cross, healed them and let them depart in peace.

St. Ilarion venerated the holy places in Jerusalem, then settled in a cave in the Jordan wilderness (according to tradition, the holy prophet Elijah had dwelt in that same cave).

One night St. Ilarion saw a vision: He was standing before the Most Holy Theotokos, in the midst of twelve men, on the Mount of Olives, the place of our Lord’s Ascension. The Holy Virgin said to him, “Ilarion! Return to your home and prepare a meal for the Lord, my Son!”

Upon waking, Ilarion understood this vision with both his heart and mind and immediately set off for his motherland.

When he returned to Georgia, St. Ilarion learned of the repose of his father and brothers. His mother gave her only living son the family inheritance.

Blessed Ilarion founded a convent with the resources he had inherited, donated lands to the monastic community, and established its rules. Then he gathered seventy-six worthy monk-ascetics and founded a monastery for men. He distributed his remaining property to the poor and disabled.

As before, the news of St. Ilarion’s virtuous deeds spread quickly through all of Georgia. Again many desired to receive his blessing and counsel, but when the clergy announced their intention to consecrate him a bishop, he abandoned Georgia for the second time. He took two companions and journeyed to Constantinople.

After the long journey, Ilarion and his companions finally reached Mt. Olympus in Asia Minor and settled in a small, forsaken church. During the evening services on Cheese-fare Saturday, the lamplighter from the Monastery of St. Ioannicius the Great came to the church to light an icon lamp, and seeing that several people had settled there, he brought them some food.

The next Saturday, the feast of St. Theodore the Tyro, the same monk returned to the church and saw that the brothers had gone the whole week eating nothing but a few lentils. They had not touched the food he had brought them. So the monk asked St. Ilarion what they needed, and Ilarion requested prosphora and wine for the Bloodless Sacrifice. Then St. Ilarion celebrated the Liturgy at the appropriate time, received Holy Communion, and served the Holy Gifts to the brothers.

When the abbot of the Great Lavra heard that a service had been celebrated by an unknown priest in a language other than Greek, he was infuriated and ordered his steward and several of the monks to chase the strangers off the monastery property. But St. Ilarion responded to the steward in Greek and asked for permission to spend the night in the church, promising to depart in the morning.

That night the Theotokos appeared to the abbot of the lavra in a vision. She stood at the foot of his bed and rebuked him, saying, “Foolish one! What has moved you to cast out these strangers, who left their own country for the love of my Son and God? Why have you broken the commandment to receive and show mercy to strangers and the poor? Do you not know that there are many living on this mountain that speak the same language as they? They are also praising God here. He who fails to receive them is my enemy, for my Son entrusted me to protect them and to ensure that their Orthodox Faith is not shaken. They believe in my Son and have been baptized in His name!” The next day the elder fell to his knees before St. Ilarion, begged forgiveness for his impertinence, and requested that he remain at the monastery. St. Ilarion consoled the elder and agreed to stay.

St. Ilarion spent five years on Mt. Olympus, then journeyed again to Constantinople, to venerate the Life-giving Cross of our Lord. From there he traveled to Rome to venerate the graves of the holy Apostles Peter and Paul. On the way to Rome his prayers healed a paralyzed man.

After spending two years in Rome, St. Ilarion set off again for Constantinople. On the way, in the city of Thessalonica, the blessed Ilarion stopped for a rest at the home of the prefect. When he arrived, a servant woman was carrying a paralyzed fourteen-year-old boy out of the house, and she laid him in the sun. The saint asked the woman for water, and when she had gone to bring it, he blessed the child with the sign of the Cross and healed him. Immediately the boy ran to his mother, and St. Ilarion quickly departed from that place.

But the prefect, the boy’s father, had witnessed the miracle, and he ordered that the wonderworker be found. When he had been brought before him, the prefect begged St. Ilarion to remain in Thessalonica and choose for himself a place to continue his miraculous works. Recognizing the prefect to be a true lover of God, the saint heeded his entreaty and agreed to remain. The prefect built a church in the place that Ilarion had chosen, and before long the entire city had heard about St. Ilarion and his miracles.

St. Ilarion spent the remainder of his days in Thessalonica. When the Lord made known to him the day of his repose, he called for the prefect, thanked him, and instructed him to love the monks and all the suffering and to be just and merciful.

The saint reposed on November 19, 875, and the sorrowful prefect prepared a marble shrine for him. Those who were sick and who approached St. Ilarion’s grave with faith were healed of their infirmities.

The prefect and the archbishop of Thessalonica informed the Byzantine emperor Basil the Macedonian (867–886) about the miracles that had occurred at the holy father’s grave. The emperor in turn informed the monks who came to him from Mt. Olympus, among whom was the elder who once had tried to chase St. Ilarion out of the church. Emperor Basil became intrigued with St. Ilarion’s disciples and fellow countrymen through the stories of Ilarion’s miracles. St. Ilarion’s three disciples were presented to him, and the emperor was so struck by their holiness that he sent them to the patriarch of Constantinople to receive his blessing. Recognizing immediately that the three elders were filled with divine favor, the patriarch advised the emperor to confer great honors upon them.

In response, Emperor Basil invited the elders to choose for themselves and their countrymen one of the monasteries in Constantinople and make it their own. The fathers graciously declined since they did not wish to live in the populous city. Instead the monks asked the emperor to build cells for them outside the capital. So Emperor Basil built a large church dedicated to the Holy Apostles in a place that the Georgian fathers had chosen in a certain ravine, where a spring of cold water flowed from beneath a little hill, and he carved a cell for himself as well. The monastery was called “Romana,” after the nearby brook.

Later the emperor sent his own two sons, Leo[1] and Alexander, to be raised by the holy fathers.

Emperor Basil sought to bury St. Ilarion’s holy relics in the capital, but the people of Thessalonica would not allow the relics to be taken away. In the end, it was necessary for the emperor’s envoys to conceal the sacred shrine and carry it back to Constantinople in secret. The emperor, the patriarch, and all the people met the arrival of St. Ilarion’s relics with glorious hymns and prayers.

Before the special burial vault had been built, the emperor kept St. Ilarion’s holy relics in his own chamber. Three nights after the relics had arrived, Basil awoke to an unusual fragrance. No one in the court could discover its source. When the emperor dozed off again, St. Ilarion appeared to him in his vestments and said, “You have done a good deed by preparing a shelter for my remains. But the sweet fragrance you smell was acquired in the wilderness, not in the city. Therefore, if you desire to receive the divine blessings in full, take me away to the wilderness!”

The emperor reported this wondrous turn of events to the patriarch and the prefect, and with their consent he brought the holy relics of St. Ilarion to the Monastery of Romana.

Through the prayers of our Holy Father Ilarion, Lord Jesus Christ our God, have mercy on us and save us! 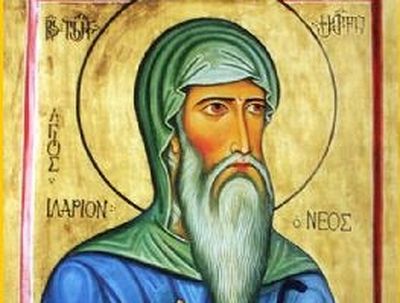 Tower of Virtue. St. Hilarion the Georgian of Mt. Athos. Part 1 Hieromonk Anthony (Torp) His life was intertwined with the upheavals of the nineteenth century: the dissolution of the Georgian Kingdom, its annexation by Russia, and the Greek Insurrection of 1821. Within these events St. Hilarion led a life that encompassed the fullness of Christianity. As a married priest he was the royal confessor, and later as a monk he witnessed to the Faith before the Muslims. He finally became a vessel of the Holy Spirit as a great ascetic and spiritual father on Mount Athos. Where he was called “St. Hilarion the Georgian". 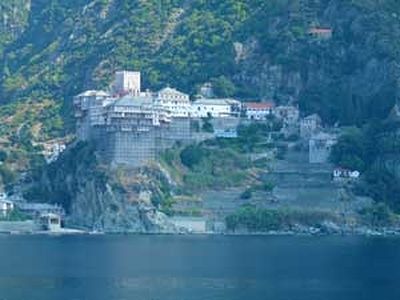 Tower of Virtue. St. Hilarion the Georgian of Mt. Athos Part 2 Hieromonk Anthony (Torp) Amid such outward struggles, Fr. Hilarion immersed himself in the sea of spiritual contemplation and noetic prayer; consequently, a bitter spiritual battle began. Many times hordes of demons appeared to him like battle regiments. Approaching the tower, they would scream, as if laying siege, attacking the tower, but they were unable to achieve their ends. Sometimes the entire multitude would try to frighten the elder, crying out, "Three sides have already been taken; there remains one, but we'll take it." 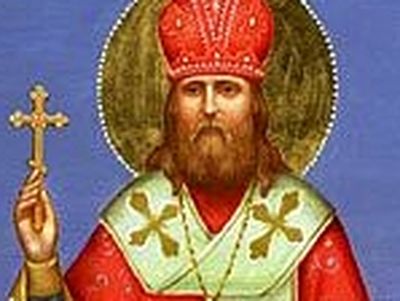 Service to Holy Hieromartyr Hilarion (Troitsky) of Verey Commemorated April 27/May 10 and December 15/28 All thy hope didst thou set on God, following His divine will; and in time of persecution thou didst take up the archpastoral staff as a cross, preparing thyself for martyrdom for the sake of Christ. Him didst thou confess before thy tormenters, enduring sufferings. And standing now before Christ, O Hilarion, thou dost rejoice with the holy Patriarch Tikhon. O Hilarion, most honored master, thy life was truly lived in accordance with thy name; for, having the serenity of prayer within thee, thou didst make manifest the joy of Pascha unto all.
Комментарии
Войдите через FaceBook ВКонтакте Яндекс Mail.Ru Google или введите свои данные: