“I still marvel at the power of his prayer.” St. John of Kronstadt 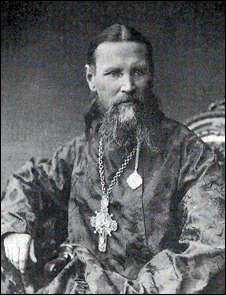 St. John of Kronstadt
On October 19/November 1, 1964 the Russian Orthodox Church Abroad canonized the great pastor of the Russian land. Russia itself was still under the Communist yoke, and although the faithful were already praying to one they knew to be a saint, the Moscow Patriarchate had not yet officially canonized him. Orthodox Christians in Russia waited for the moment when they could freely venerate the famous wonder-worker of Kronstadt. At the threshold of the millennial celebration of the Baptism of Russia in 1988, more and more information on him began to appear in print in preparation for his canonization.

After the millennial the Church breathed a little more freely, and in 1990 The Moscow Patriarchate glorified St. John of Kronstadt. He is now venerated by Orthodox Christians throughout the world.

Archpriest John Ilyich Sergiev was born on October 19, 1829 in the village of Sura, near Arkhangelsk, where priests from the Sergiev family had served for three and a half centuries. The seed of piety sewn in the family and nurtured over long years of study at the parish school (1839-1845), the Arkhangelsk Seminary (1845-1851), and the St. Petersburg Theological Academy (1851-1855) yielded beneficent fruit in parish ministry. In 1855 John Sergiev married Elizaveta Nesvitskaya, the daughter of Archpriest K. N. Nesvitsky, and was designated a priest at the Kronstadt Cathedral Church of St. Andrew the First-Called.

Father John viewed his pastoral duty as lying in the spiritual and moral healing of the dying and in easing the lot of the poor, homeless and orphaned. Following Christ's commandments about love and charity towards others, he supported and encouraged charity work and became himself the soul of all sorts of good projects. In 1874 he founded the Parish Guardianship for Aid to the Poor, and in 1882, the "House of Diligence," with a children's library, free elementary school and workshops.

However, Father John considered the temple of Christ the true hospital for afflicted souls, and the Divine Liturgy the most effective instrument of healing. As many as 6,000 people came to him for confession, which sometimes lasted as long as 12 hours, and Holy Communion for three or four hours at a time. Father John himself received Holy Communion every day. His celebration of the Divine Liturgy was, as contemporaries put it, "impassioned and divinely inspired." Each time, Father John experienced an encounter with God in reverence and fear. His righteous life and his zealous service for God won him the grace-bestowing gift of miraculous healing. St. Theophan the Recluse, himself a remarkable ascetic of the faith, spoke of him with wonder: "Father John of Kronstadt is a man of God. His prayer has reached God by virtue of his great faith. May the Lord keep him in humility and devotion to His holy will, and in self-sacrifice." On December 9, 1908 Father John celebrated his last Liturgy, and on December 20 the great holy man of the land of Russia commended his soul to God. He was buried in the lower church of the Convent of St. John which he had founded. 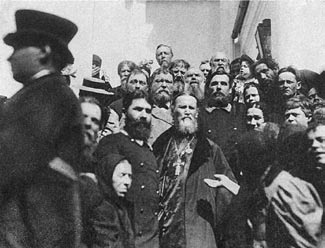 The Christian views of Father John and his comprehension of the spiritual life go back to the teaching of the Holy Fathers. He can be called a starets in non-monastic life. Unlike the tradition of Optina eldership, he did not go through the monastic school of spiritual labor but ascended the spiritual heights through the grace of God, which is bestowed in the Sacrament of the Eucharist. Father John's place as preacher in the Russian Church is exceptional and determined not solely on the basis of analysis of his sermons and homilies. He also preached and gave witness to God with his impassioned celebration of the Liturgy. The Athonite starets St. Silouan recalls: "I still marvel at the power of his prayer. Almost 40 years have passed, yet I have not seen anyone serve the way he did." The Liturgy was, for Father John, the most efficacious and grace-bestowing instrument for preaching the Gospel. Exceptionally lucid and simple thoughts and experiences, the centerpiece of which was liturgical service to God, comprised the book My Life in Christ—a unique homiletical diary-collection—in which each individual entry is a sermon brief but strong in its spiritual edification.

Father John Sergiev breathed fresh life into Russian spirituality, making it predominantly Eucharistic. With eldership on the wane, this age-old Russian form of religious piety prophetically bequeathed by Father John of Kronstadt determined the existence of the Russian Orthodox Church for many years to come.

An excerpt from My Life in Christ, the spiritual diary of St. John of Kronstadt:

How is it that the saints see us and our needs and hear our prayers? Let us make the following comparison: Suppose that you were transplanted to the sun and were united to it. The sun lights the whole earth with its rays, it lights every particle of the earth. In these rays you also see the earth, but you are so small in proportion to the sun, that you would form, so to say, but one ray, and there are an infinite number of such rays. By its identity with the sun this ray takes an intimate part in lighting the whole world through the sun. So also the saintly soul, having become united to God, as to its spiritual sun, sees, through the medium of its spiritual sun, which lights the whole universe, all men and the needs of those that pray.

Have you learned to see God and represent Him to yourself—as the omnipresent Wisdom, as the living, acting Word, as the vivifying Holy Spirit? The Holy Scripture is the domain of Wisdom, Word and Spirit, of God in the Trinity: in it He clearly manifests Himself: "The Words that I speak unto you, they are spirit, and they are life," said the Lord. The writings of the Holy Fathers are again the expression of the Mind, Word and Spirit of the Holy Trinity, in which the spirit of the higher class (spiritually speaking) of mankind has largely participated; the writings of ordinary worldly men are the expression of the fallen spirit of men, with all their sinful attachments, habits and passions. In the Holy Scriptures we see God face to face, and ourselves as we are. Man, know thy self through them, and walk always as in the presence of God. 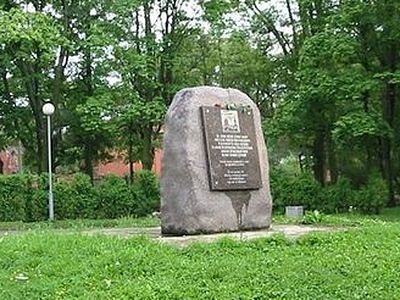 Feast-day of St. John of Kronstadt to be celebrated as a town holiday in Kronstadt 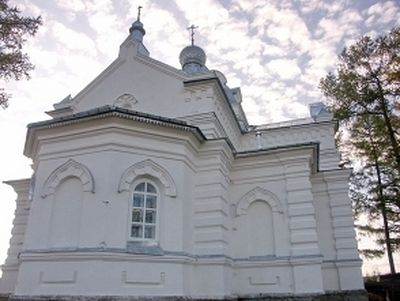 Sura Convent restoring historic building and church at the birthplace of St. John of Kronstadt 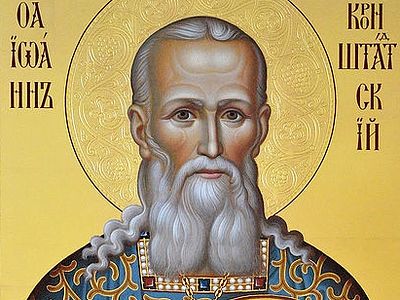 Miraculous Help from St. John of Kronstadt Today
Olga Rozhneva
My heart froze. I asked her myself how my son is. The doctor answered, “Mama, there must have been some mistake with your son. It can’t be explained any other way. 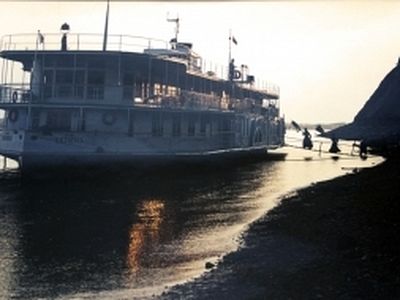 Sea procession held in honor of the 185th anniversary of St John's of Kronstadt birth
The cross procession was dedicated to 185th years since the birth of St John of Kronshtadt. The aim of the event was not only the restoration of spiritual traditions of pilgrimages to the shrines of the Russian north, but also to attract attention to the Sura Convent of St. John. 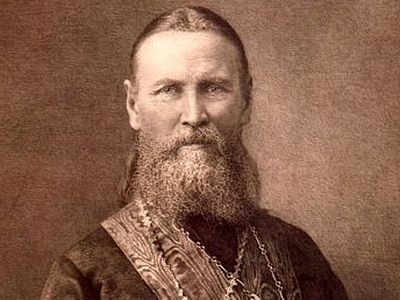 John of Kronstadt: Saint of Communion, Saint of Confession
Metropolitan Kallistos (Ware)
It is very clear that when St. John in his Epistle and our Savior in the Gospel speak about love they do not just mean something sentimental, something emotional, they mean something far more profound. The kind of love that they envisage, a universal all-embracing love, a love without limits, can only be a result of prayer, of ascetic effort. 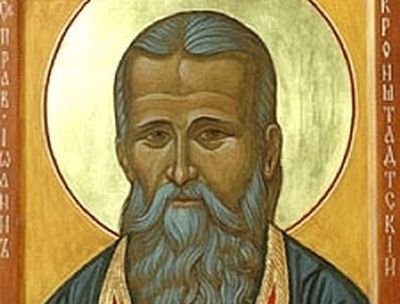 My Life in Christ
St. John of Kronstadt

My Life in Christ
St. John of Kronstadt
"In this warfare I have come to know the immensity of God's long-suffering to us; for He alone knows all the infirmity of our fallen nature, which He mercifully took upon Himself, except for sin (I Peter2:22; Isaiah 53:9; I John 3:5; 4:10; Hebrews 4:15), and therefore He commanded us 'seventy times seven' times to forgive the sins (St. Matt. 18:22) of those who have fallen into them; and He has surrounded and continued to surround me everyday with the joys of salvation from sin in peace and expansion of the heart. The Divine mercy which I have experienced and the perpetual nearness to me of the Lord confirm me in the hope of my eternal salvation and in that of those who follow and hear me to salvation, according to the word of the Scriptures, 'Behold I and the children which God hath given me'"
Комментарии