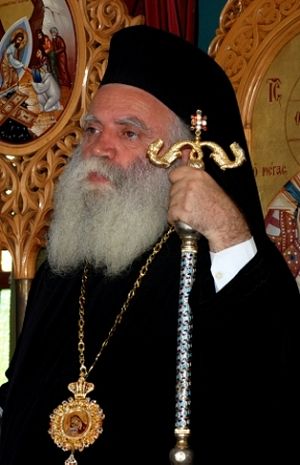 In a letter to the Holy Synod of the Greek Orthodox Church, Metropolitan Seraphim of Kythira commented on the “Great and Holy” Council of Crete and the documents adopted at it, reports Agionoros.

Vladyka noted that the document “Relations of the Orthodox Church With the Rest of the Christian World” has become an opportunity for disputes, “for the fall, and the uprising of many,” with unpredictable consequences for the unity of the holy Orthodox Church. Metropolitan Seraphim characterized the document as a “stumbling block” not only for “many believers, but for four Local Churches, making up the majority of Orthodox believers.” Vladyka criticized the conduct of the delegation of the Greek Church at the Crete council, which, yielding to pressure, did not defend to the end the amendments to the conciliar documents proposed by the Holy Synod of the Greek Church.

The metropolitan accused the Cretan council of a “serious violation of conciliarity,” in that the majority of Orthodox bishops did not have the opportunity to take part in its work. He also called unacceptable the decision to confess the ecclesiality of other Christian confessions. “For nineteen centuries the One, Holy, Catholic and Apostolic Church has refused to name various heretical Christian communities as Christian Churches,” noted the bishop. He called such a position a “manifestation of humanism.” “We do not abandon those abiding in the darkness of heresy and malicious intentions to find rest in their confusions and spiritual darkness, but we remind them of the words of the Lord: And ye shall know the truth, and the truth shall make you free (Jn. 8:32).”

Vladyka Seraphim noted that the heterodox consider themselves to be “Christian Churches,” and that the Orthodox do not possess the fullness of truth: Catholics consider the Orthodox Church “defective” because there is no papal primacy, and Protestants “see shortcomings in that we don’t have women’s ordination and gay marriage.” “In such circumstances, calling the heterodox Churches, do we not contribute to the fact that they continue to dwell in their delusions, not troubling about anything? Are we not hiding the truth and light of Christ from them? Won’t we, the Orthodox, answer on the day of judgment for constructing this spiritual tower of Babel and concealing the saving Truth of God?” the bishop asked. 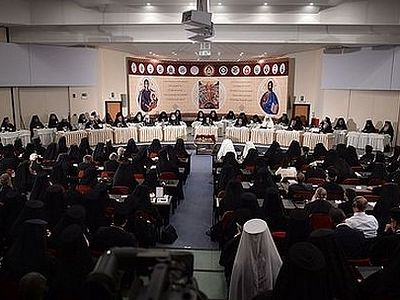 Reflecting on the Message of the Holy and Great Council
Fr. Ted Bobosh 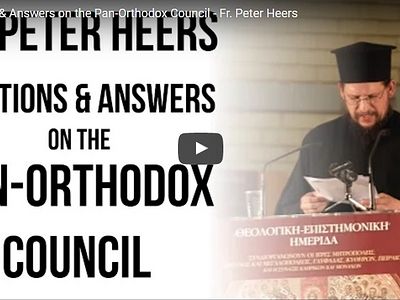 Questions and Answers on the Pan-Orthodox Council, Part 1
Fr. Peter Alban Heers
Protopresbyter Peter Heers, PhD., rector of the Holy Prophet Elias in Petrokerasa, Greece, and author of The Ecclesiological Renovation of Vatican II: An Orthodox Examination of Rome’s Ecumenical Theology Regarding Baptism and the Church, his doctoral dissertation completed at the University of Thessaloniki, recently spoke via video with the faithful gathered at the Apostle Paul Orthodox Christian Bookstore in Toronto, discussing various issues surrounding the present Council on the island of Crete, including the history of its preparation and the preparation of the documents under examination at the Council, as well as the disputes over the documents. Several short Q and A videos are offered below, followed by the entire presentation: 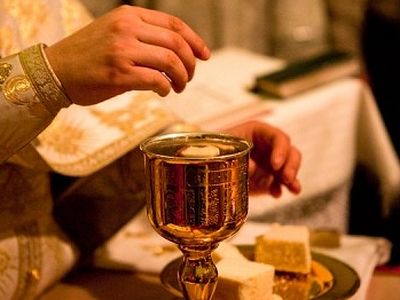 ROCOR HOLY SYNOD on Pan-Orthodox Council Texts
Communication of the Holy Synod of the Russian Orthodox Church Outside of Russia to the Clerics and Faithful—13 April 2016.

ROCOR HOLY SYNOD on Pan-Orthodox Council Texts
Communication of the Holy Synod of the Russian Orthodox Church Outside of Russia to the Clerics and Faithful—13 April 2016.
The process of addressing the pastoral needs of any given age is one which requires both tremendous prayer and ascetical devotion from all Christians, but also the dedicated, deliberate work to ensure, in any document the Church may put forward, the faithfulness to the Gospel we have inherited. All such texts, now as throughout history, go through many stages of preparation and revision; and the fact that we, together with others, have identified serious problems with some of the documents pending consideration by the forthcoming Council should be a cause for neither fear nor anxiety. The Holy Spirit Who always guides the Church in love, is not far from us today; and the Church is not in our times, nor has she ever been, without the active headship of her True Head, Christ our God, Whom we trust with full faith will guide His Body in all truth.
Комментарии

Anthony26 октября 2016, 10:00
There is a good 4 minute video on youtube entitled "Three reasons why the Crete Council is worthy of condemnation". Definitely worth a watch/read.