The following is a brief reflection on the Gospel reading for the Sunday after Pascha, John 20:19-31 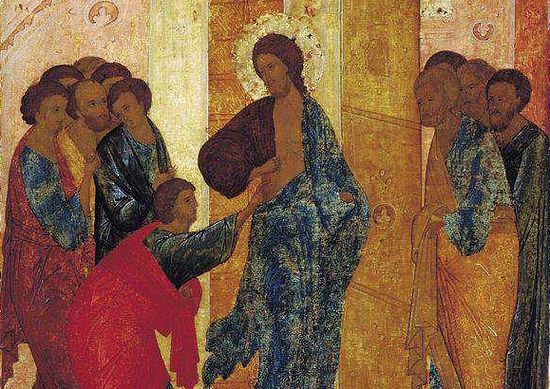 When the disciples had gathered on the new Passover (Pascha), the Lord’s Day or Resurrection Day, Jesus entered the room where they were — "the doors being shut … for fear of the Jews" — stood in the midst of them and showed them His hands and side. Christ then greeted them with that salutation, retained by the Church through the ages, with which the priest greets the faithful at each of the important parts of the Divine Liturgy and other services: "Peace be unto you." Twice our Lord delivers this message of peace to His disciples that "first day of the week." We are reminded in this of the Savior’s words before the Crucifixion: "My peace I leave with you, my peace I give unto you: not as the world giveth, give I unto you" and "these things I have spoken unto you, that in me ye might have peace." (John 14:27; 16:33) The Resurrection, of which the beloved disciples were witnesses, was the confirmation of Christ’s entire life of prophecy and sacrifice. It was a reassurance that the peace He had come to give the world was not vain or imagined. Nor was it peace on strictly a human level, for example the absence of war or strife among men. Rather this peace was the presence of the Prince of Peace in the midst of human existence. It was the long awaited reconciliation between God and man, and in God a profound "union of all men" as children of the Most High, a peace that the world is unable to provide or understand.

Continuing the Gospel reading for Thomas Sunday, we are told that the apostles "were glad when they saw the Lord." Once more Christ’s words prior to His Passion are brought to mind: "I will see you again, and your heart shall rejoice, and your joy no man taketh from you." (John 16: 22) This joy that our Lord promised His disciples is, like peace, that which is experienced in the Divine Presence. It is the same joy felt by Christians after all these centuries when they participate, through the divine worship of the Church, in the blessings of the Kingdom to come. Particularly in the Eucharist an almost inexplicable joy is experienced in an encounter with the risen Lord, in communion with His Holy Body and Blood. "For where two or three are gathered together in my name, there am I in the midst of them." (Matthew 18:20) "He that eateth my flesh, and drinketh my blood, dwelleth in me, and I in him." (John 6:56) In the Eucharistic gathering Christ’s glory is revealed to His disciples and they are thus strengthened and confirmed in their faith in the promises of Christ, ready to return to the world from which they were called out. "But ye are a chosen generation, a royal priesthood, a holy nation, a peculiar people; that ye should show forth the praises of him who hath called you out of darkness into his marvelous light." (1Peter 2:9) (The Greek, ecclesia, from which we get the word Church means, called out.)

Then He said to them again, "Peace be unto you: as my Father hath sent me, even so send I you. And when he had said this, he breathed on them, and saith unto them, Receive ye the Holy Spirit: whosesoever sins ye remit, they are remitted unto them; and whosesoever sins ye retain, they are retained." (John 20: 21-23) The Church is simultaneously called out, "consecrated," and then sent to accomplish the same work as her Founder. Christ preached repentance and the advent of a heavenly Kingdom. His mystical Body, the Church, has the same mission in this world of extending God’s Kingdom, central to which is the pronouncement of repentance and forgiveness. The Church, in God’s name, pronounces forgiveness to all in light of a heavenly Kingdom revealed in Christ. The Church carries out her mission through the guidance and by the power of the Holy Spirit.

Now "Thomas, one of the twelve, called Didymus, was not with them when Jesus came," and when the others told Him, "we have seen the Lord." He, therefore, said, "Except I shall see in his hands the print of the nails, and put my finger into the print of the nails, and thrust my hand into his side, I will not believe." (John 20: 24-25) Thomas is like so many of us in that he would require tangible, visible proof that Christ is really active in the lives of His people, caring for creation, and that He was what He claimed to be: "He that hath seen me, hath seen the Father." (John 14:9) Some today desire generally that kind of evidence even for God’s existence, "irrefutable" evidence making it impossible for man not to believe. That type of unquestionable, undeniable proof, we can say, will be put forth only at the end of this age, when "the Son of man shall come in his glory, and all the holy angels with him …" (Matthew 25:31) At that time it will indeed be quite impossible for anyone (although some may try in vain) to deny "the King of kings and the Lord of lords." (Deuteronomy 10:17; Revelation 19:16)

God’s most important gift to man, that which identifies him as a creature made in the image of God, is free will. The Lord honors this gift. He loves man and would have man love Him freely in return. God, therefore, will not force man to accept Him, but would have him approach his Creator in faith and trust. We would do well to remember the example of St. John the Baptist. He bore witness to his Lord saying, "Behold, the Lamb of God which taketh away the sin of the world!" (John 1:29) Yet after being arrested, in a moment of hesitation or doubt, the Forerunner sent his disciples to Christ asking, "Art thou he that should come, or do we look for another?" (Matthew 11:3) At first glance this question seems strange, indeed contradictory, for "the greatest born of women" to be asking.It is thus important to note that Jesus does not seek to answer it in some "definitive" way, irrefutable in John’s mind. Rather He responds in terms of an invitation, still beckoning His servant to place his trust freely in Him: "Go and show John again those things which ye do hear and see: the blind receive their sight, and the lame walk, the lepers are cleansed, and the deaf hear, the dead are raised up, and the poor have the gospel preached to them. And blessed is he, whosoever shall not be offended in me." (Matthew 11:4-6)

Near the end of the Gospel passage, after Thomas exclaims, "My Lord and my God," Jesus says to him, "Because thou hast seen me, thou hast believed; blessed are they that have not seen, and yet have believed." Faith: this is the way that God would have us come to Him. "Faith," says St. Paul, "is the substance of things hoped for, the evidence of things not seen." (Hebrews 11:1) People sometimes lament the fact that they did not live in Apostolic times when it would have been possible to see for themselves and talk face to face with the Incarnate Lord. In the minds of many, this would constitute tangible proof of God’s existence and alleviate any doubts concerning Christ. But would it? Israel was prepared for almost two thousand years for the Messiah’s advent. Miracles were performed by Him in the peoples’ midst. Yet, in the end, those who heard and saw Jesus for themselves wound up shouting, "Away with Him, away with Him, crucify Him." Only a few individuals stood with Him at the foot of the Cross. One really has to wonder seriously if we would have been any different given the chance. For regardless of how and when the Lord chooses to reveal Himself it is always possible, in freedom and because of sin, to explain away that revelation.

A primary emphasis here is that the historical period in which one exists makes no difference as far as one’s relationship to Christ is concerned and his or her ability to know the Truth and live by faith. We have the mystical Body of Christ, the Church’s sacramental, liturgical life, and the Lord’s promise to be with us always. We have "received the Heavenly Spirit," and are blessed with the examples, testimonies and presence of countless saints who have gone on before us. We are literally living, right now if you will, in Apostolic times. So it seems as though we are missing the mark if we begin to demand, from God or from ourselves, objective, factual knowledge in terms of "proof," before we can come to faith. At some point a "leap of faith," will be required, for as mentioned above, so-called concrete evidence can always be discarded if that is what is desired. On the other side of that "leap," though, is the knowledge that we all seek Once there, there is no lack of proof. But without this faith no amount of knowledge or evidence will suffice. There will always be room for doubt, and opportunities for man in his "wisdom" to deny what is so plain and simple to all who have truly found the narrow path that leads to life.

"Blessed are they that have not seen, and yet have believed." 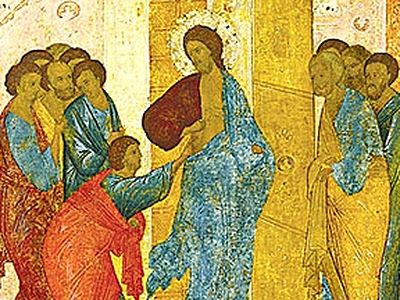 The Second Sunday of Pascha. Thomas Sunday (John 20:19-31)
From The Explanation of the Gospel of St. John by Blessed Theophylact, Archbishop of Ochrid and Bulgaria

The Second Sunday of Pascha. Thomas Sunday (John 20:19-31)
From The Explanation of the Gospel of St. John by Blessed Theophylact, Archbishop of Ochrid and Bulgaria
The Evangelist provides the meaning of the name here to indicate that Thomas was prone to be of two minds—a doubter by nature. He doubted the news brought to him by the others, not because he thought they were liars, but because he considered it impossible for a man to rise from the dead. And his doubt made him excessively inquisitive. 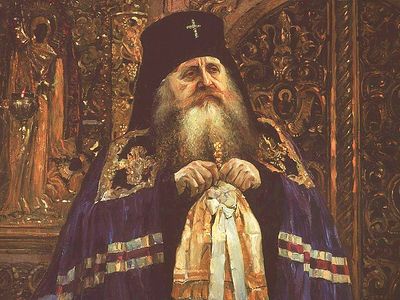 Thomas Sunday
Metropolitan Anthony (Khrapovitsky)
People say: if we had seen Him we would not have denied Him. This is not true: the majority of those who denied Him had seen Him, and they denied Him because they did not love spiritual values, and the victory over the devil spoke but little to their hearts; they desired external success. 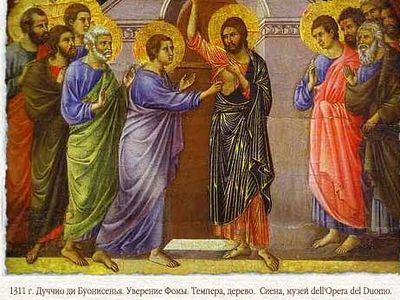 St. Thomas Sunday
Fr. Sergei Sveshnikov
Although from the very early morning on the day of the resurrection the good news of the resurrection was carried throughout creation, and even though angels from heaven (Mark 16:6) and holy myrrhbearers on earth (Luke 24:9) and even the guards at the Sanhedrin (Matthew 28:11) had already told of the miracle, the apostles were still in a state of fear and doubt, hiding behind doors and locks “for the fear of the Jews” (John 20:19).
Комментарии