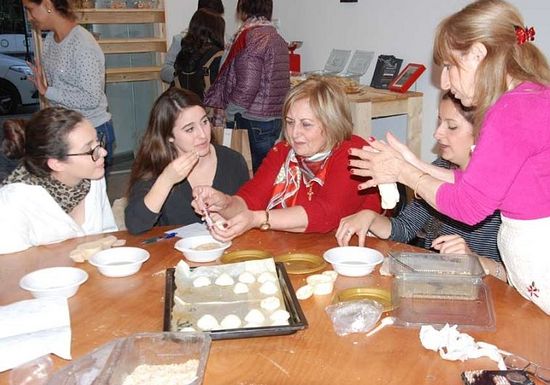 For some reason in northern climes the pretty sugar pumpkin is more likely to be carved up and left to rot, a decaying jack-o'-lantern, rather than put to good use sweetening the season’s long and dim days.

This is not the case in northern Israel, where a glistening mound of candied gourd shards greeted guests at a workshop run by the enterprising church ladies of Rameh’s Orthodox Christian Church, who run cookie-making workshops and are preparing to sell their Christmas cookies and confections to benefit charity.

The entire room, the salon of a Haifa art gallery where the workshop is taking place, smells of rosewater and burbling anise (yansoon) syrup. The tables are covered with clumps of dough, dusted with flour, papered over with notebooks of the women who’ve signed up to pick up new skills and a few trade secrets, such as the trick of slipping a thin tricot cloth cover, something like a sock, over your ma’amoul molds so as to facilitate the cookie’s popping out, while preserving the intricate patterns engraved in the old wooden implements.

Nabeela Doha, the lady in charge, sits at a worktable quietly observing the participants, saying “press your thumb in further” or “hit that harder on the table!” or “add more spice” as the case requires. Some cookies require ingredients rare in the West, such as mahleb, the ground up kernels contained inside of cherry pits. Like bitter almonds, which are easily available in the West, they impart a deep, mysterious quinine-like flavor to sweet baked goods.

Incorporated as “Khemlat el-Tayeb,” which loosely translated means “the lobby of goodness” the women of the Galilean village of Rameh turn out piles of ma’amouls, round cookies variously made of smooth flour dough or a crumbly semolina dough, stuffed either with dates or nuts; gleaming trays of basbousa, a spongy semolina-based sheet cake soaked in orange blossom water, and that irresistible hillock of glowing slivers of pumpkin.

The candies are formed of small pieces of pumpkin treated with lime, that provides them a crunchy shell and renders them transparent and shiny as jewels. They are quite simply called “sukar,” meaning sugar, bringing us back to the pumpkin’s sugary origins. 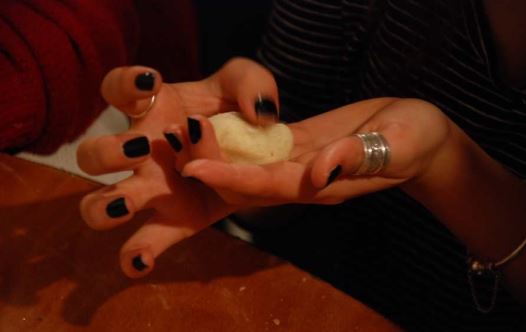 Mary Dow, another leader of the cookie collective that provides funds to families in need and to students struggling to pay their fees, casts a sharp eye on customers filling cookie boxes piece by piece. “You’ll want more than two of those ma’aruta,” she soundly counsels Dalia, a Haifa resident who just rushes in to take cookies home. “That’s exactly what I’m worried about!” dalia retorts. An in fact, the cookies (recipe below) are irresistible.

Flaky, filled with a thin layer of earthy dates and perfumed with orange blossom water, it is hard to stop oneself from reaching out for another. They are the prefect accompaniment to coffee.

Divide the dough into eight balls, and roll each out very thinly, to about 1/8 inch thickness.

Delicately spread each rectangle of dough with a layer of date spread, and roll each one as if rolling an ultra-light jelly roll. Slice into ½ inch thick rounds, and place on baking mat.

Melt and quickly set aside the butter.

In a large bowl, combine the sugar and yogurt. Mix in the semolina, baking powder and milk. Last, stir in the melted butter and allow mixture to rest.

Place dough in a lightly greased 9"-round cake pan or baking dish. Bake for about 40-45 minutes, till the top of the basbousa turns golden.

Remove from oven. While the cake is baking, prepare the syrup. In a small sauce pan, combine sugar and water, bringing to a boil and stirring until the sugar dissolves.

Turn heat to low and syrup to thicken. Remove from heat and stir in the orange blossom water. Allow to cool completely, While the cake is still warm from the oven, saturate it with the cool syrup.

Allow to cool completely so that the syrup is fully absorbed by the cake.

Are We Ready for Christmas? Metropolitan Augoustinos Kantiotes "It is my hope that I speak to the faithful who know but one kind of drunkenness, that holy drunkenness described by the Psalmist who exhorts us to taste and see that the Lord is good (Psalm 33:8). I hope that you have you ears open for blessed is he that speaketh in the ears of them that will hear (Sirach 25:9)."