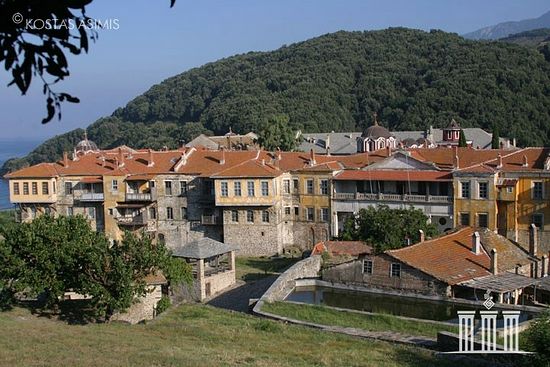 Saint Hierotheus was born in 1686 in Greece. Desiring to comprehend Divine wisdom as it is in the sciences and also as it is in monastic life, the pious youth, displaying great ability and diligence, studied Latin and Greek philosophy.

After the death of his parents, and wanting to continue his education, St Hierotheus first of all visited Mount Athos, which was famous for its many male teachers. At first he was the disciple of a certain hermit near the cell of St Artemius (October 20), and then he joined the brethren of the Iveron monastery, where he received the monastic tonsure.

St Hierotheus soon journeyed to Constantinople on monastery business, and from there to Valachia, where the Lord directed him to continue his interrupted education. Having been instructed by a certain Cypriot monk, St Hierotheus by his good manners merited the favor of Metropolitan Auxentius of Sofia, and was ordained deacon.

After completing his education in Venice, St Hierotheus returned to the Holy Mountain. He settled near the Iveron monastery in the Khaga wilderness. According to the testimony of his contemporaries, he led a very strict hermit’s life; with the constant Jesus Prayer the monk discovered deep love for neighbor and joy-creating sorrow. On the intercession of the igumen of the Iveron monastery St Hierotheus was ordained to the priesthood by Metropolitan James of Neocaesarea, who lived there in retirement.

At the request of the inhabitants of Skopelo, who had no priest, the self-denying ascetic forsook his solitude. He celebrated the services and preached for eight years, together with his Athonite disciples the hieromonk Meletius and the monks Joasaph and Simeon.

Foreseeing his own impending end, St Hierotheus with three disciples withdrew to the island of Yura, where those banished for life were usually sent. There after a short illness he departed to the Lord in the year 1745. His disciples buried him on that island, and after three years his venerable head was transferred to the Iveron monastery. Many sick and those afflicted with bodily suffering were healed by prayers to the saint.