In Memory of Fr. Roman Braga 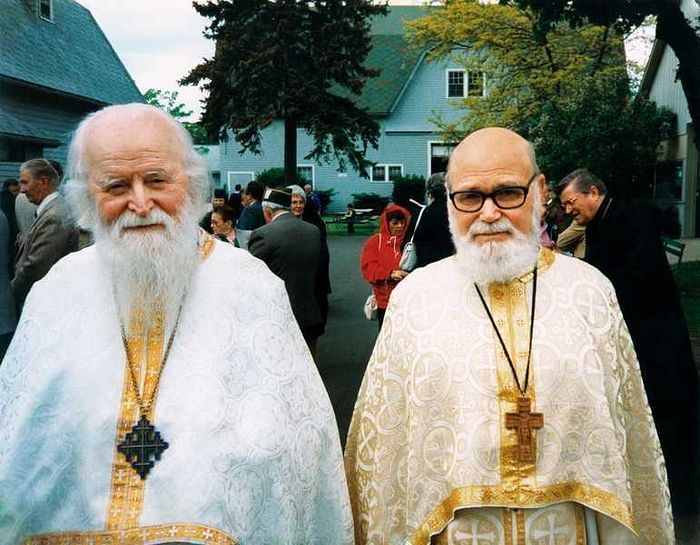 The following recollections were spoken by Mother Christophora, abbess of the Orthodox Monastery of the Transfiguration in Ellwood City, Pennsylvania, at the funeral of Fr. Roman Braga, who reposed in the Lord on this day in 2015. The ever-memorable Fr. Roman went through the purifying fire of suffering in Communist Romanian prisons, and after his relocation to the United States, he became the spiritual father of the nuns, both Romanian and American, in Ellwood City and later in Rives Junction, Michigan. His legacy is enduring, and may his memory be eternal!

I represent the Monastery of the Transfiguration, in Ellwood City, PA, founded nearly fifty years ago by the late Princess Ileana of Romania, known in monastic life as Mother Alexandra. Mother envisioned and founded the first English-language, pan-Orthodox monastery in America for women of all ethnic backgrounds.

Father Archimandrite Roman was the priest of our monastery from 1983-1989. This was a time of yet another transition in Father Roman’s long life—a transition from being a parish priest in America to being the chaplain of a women’s monastery. 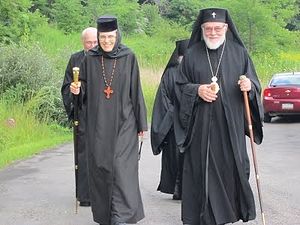 Mother Christophora with Bp. Nathaniel. Photo: orthodoxmonasteryellwoodcity.org
For our monastery in Ellwood City, it was a time of transition as well. And Father was a gentle and wise man, knowing how to bridge the two cultures coming together under one roof. He had to bridge the gap between the spiritual and cultured Mother Alexandra, a former princess of Romania—the Romania of the past—and his sister, Mother Benedicta, who was then superior of our monastery. Mother Benedicta came to our monastery after having lived many, many years in Varatec Monastery in Romania. She knew monastic life through and through. At that time though she was having a difficult time trying to get a handle on the American culture and the women of this culture who were coming to be nuns. Living among us were the other nuns who also came from Varatec—Mother Apolinaria and Mother Gabriela—as well as Mother Justina, the widow of a Romanian theologian who was now living in the States. She entered our monastery as a novice when she was over seventy years old. To add to the melting pot were a half dozen or so American women, many of whom were converts to the faith and were trying to put on the monastic mantle as they understood it to be.

I was one of the young Americans blessed to live among this holy gathering of Romanian monastics. I can say that it was interesting, but not easy, for any of the above-mentioned members of the “cast of characters,” due to the vast variety of backgrounds, personalities and ages. The bridge that made this all possible, I believe, was Father Roman. And it was the many virtues of this humble, holy, joyful man through whom the Lord worked in order to establish the spiritual foundation of our monastery in Ellwood City.

Father had a wonderful grasp of the American culture, along with a respect for the nation and her qualities. He encouraged us, the younger sisters, to take responsibility for the monastery, to feel at home, to love one another, like a family, and do all we could to “serve the Lord with gladness.” He understood our psychology and built on it, rather than destroying it or trying to convert it to an old-world psychology and ways.

He was joyful, of light spirit. If he sensed that we were tired or discouraged during the long monastic services he would raise his pitch to try to lift the mood of the singing and chanting, keeping a quick pace in the service. He tried to build up the gifts and talents that each sister brought to the monastery, taking into consideration her cultural background, education and experience.

At the same time, he was willing and available to have long and deep spiritual conversations in Romanian with Mothers Alexandra and Benedicta, keeping abreast of world events that would interest or concern them.

Father also understood the Orthodox ethos in this country. He encouraged frequent Communion, a practice that most Americans, by the 1980’s, were learning in their parishes. And how providential was today’s appointed daily Gospel reading! Perhaps it is the Gospel Father quoted most often when he was with us: Unless you eat the flesh of the Son of Man and drink His blood, you have no life in you … He who eats Me will live because of Me! (Jn. 6:53, 57).

Father did splendid work setting English texts into Byzantine music but also encouraged us to use the standard OCA music, since that was the music most of the American nuns were familiar with and used to. He understood that everyone coming to services, whether nuns or pilgrims, should find something familiar to their soul and background.

He had an excellent command of the English language and would have interesting and deep conversations with any visitors who might come to our door—Romanian, American, or of any background, meeting them on their level of education and interest.

All of you know of these and many more qualities of our newly-departed spiritual father and guide, Father Roman. Each of you could speak of the spiritual direction he gave to you.

I have focused here more on his effect on the life at the monastery in Ellwood City—a monastery founded for American women. He encouraged openness, genuineness, love joy and hospitality in our monastery. I believe that he, perhaps even more than our abbesses, set the tone for our community life. It is now twenty-six years since Father departed from Ellwood City to come to Rives Junction. I believe that the tone that he set in Ellwood City continues to permeate that convent to this day, as we try in our feeble way to emulate it.

May he rest with the saints, and may his spirit continue to abide among us, so that others may come to know and love the risen Lord. Christ is risen! 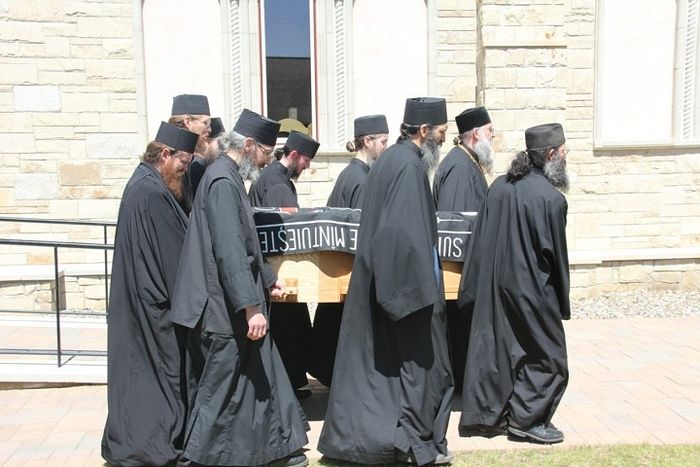 Our monastery is blessed with recordings made of Fr. Roman speaking with [visiting groups]. We offer a bit of his “voice” excerpted from 1984 archives:

A Word from Fr. Roman Braga 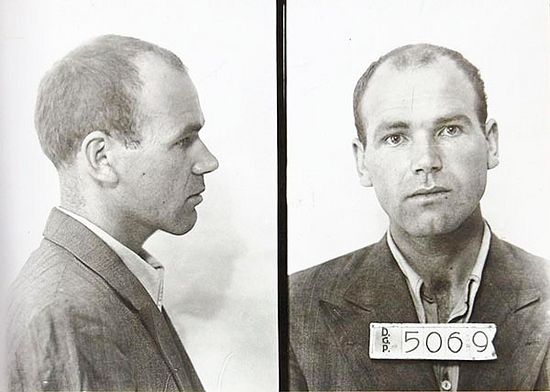 I was in Communist prison eleven years—in solitary confinement three years. I found out in prison that I didn’t know anything. My idea of God disappeared. But what I found out is that the God of the books is different from the God of the experience. When you feel God is alive, I live because Christ lives in me. When Christ is your life you don’t need books, you don’t need treatises of theology, you don’t need lectures, you don’t need anything. I found the true God in prison after so many years of seminary and theology and books and scriptures and all kinds of studies. You learn by experience because He is something to be experienced. God is alive. We are the slaves of the books. Sometimes you don’t get time to be yourself—you are made of quotations—Kant said this, Plato said that, the Holy Fathers say this. You are different.

We don’t have to imitate anybody because we are ourselves. We take principles form here, from there. We need only the Scripture—we don’t need another book because God speaks to you through the Scriptures. And you start talking with God and say, “Look, Lord, you created me. Who am I? You wanted me to be in this world.” Here you start to learn it—God Himself teaches you who you are.

Each man and woman is a specific individual—not like anyone else. God doesn’t repeat Himself when He creates something. So you have your own method in prayer that is only yours; it’s in vain to tell you my method. But just start it—practice it—and God gives you your own method that is very personal. Our life in God is very personal—is not like another person’s life—but what is important is do it—have a life in God. Talk with Him—feel His presence and He will you teach you who you are. 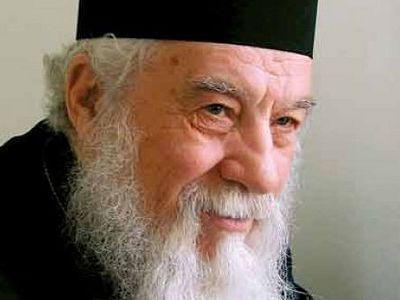 Fr. George Calciu, My Spiritual Father
Word for Youth, Putna Monastery, Romania, August 2015
Frederica Mathewes-Green
The thing that impressed me most about Fr. George was his persistent cheerfulness. He would hold my hand and talk with me animatedly, as we stood in the nave of his church. He was full of joy, and I wondered how that was possible after such terrible suffering. 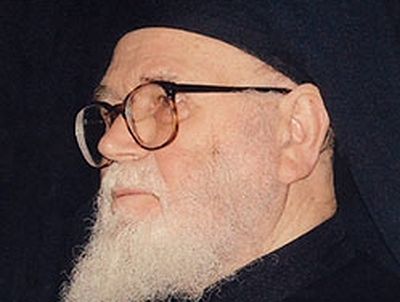 Fr. Roman Braga reposes in the Lord
Yesterday, April 28, a priest of the Romanian Orthodox Episcopate of America reposed in the women’s Monastery of the Dormition of the Mother of God in Rives Junction, Michigan. 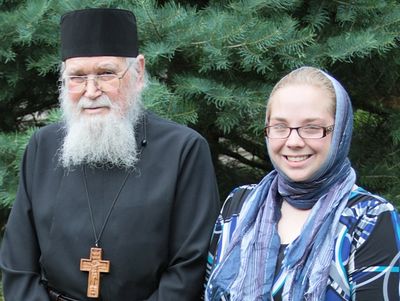 “God Is Always With You” An Interview with Father Roman Braga
Fr. Roman Braga, Jessica Precop

“God Is Always With You” An Interview with Father Roman Braga
Fr. Roman Braga, Jessica Precop
When we were free we did not have time to ask ourselves these questions. Our faith was superficial because you can learn a lot of things and can have a mind like an Encyclopedia full of all the knowledge, but if you don’t know yourself and who you are!. Even if you know everything in the world you are superficial if you do not ask yourself who am I? Why do I exist? What is the destiny of my life? Why did God create me? If I believe in God what does God want from me?
Комментарии

Michele Kochoff Platt 1 мая 2017, 05:02
Spending three summers at the Vatra (76,77, and 78), allowed me the privilege to meet and speak with Fr. Braga. He was a kind and gentle soul, providing spiritual guidance to a sixteen year old girl. He even trusted me to trim him hair!

Dn. Samer Hanna30 апреля 2017, 07:51
I miss this Holy man. He was not just a priest, he was a prophet, physician. Builder, person to look up to, a friend, father and most importantly man of prayers. He knew God not knew of God. Your feelings when you were next to him is that you are in the kingdom. I wanted to just look at his face to glance at the radiation coming out of His heart through his face I am blessed to be one of his spiritual sons, the most prodigal son he had, but I know that I, and my family was included in his prayers and I know that we are still. Pray for me o holy man of God. Deacon Same Hanna

James Potthoff29 апреля 2017, 05:25
I remember Fr. Roman best as a brilliant man possessed of a childlike joy and innocence, against all odds. He also had the gift of prophesy, which I witnessed first hand. May his memory be eternal.