Pilgrims allowed back into Azerbaijan monastery 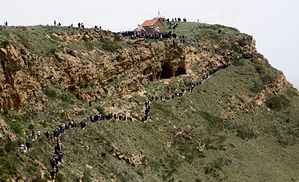 Pilgrims to one of former Soviet Georgia’s most renowned monasteries, part of which lies in Azerbaijan, are again able to visit the entire complex after an agreement between two countries.

Early this month, Azerbaijan began blocking pilgrims from visiting the approximately 2 percent of the David Gareja monastery complex inside its borders. The monastery, dating from the 6th century, is one of the Georgian Orthodox Church’s most sacred sites.

Azerbaijan’s move sparked distress in Georgia; hundreds of protesters marched in the capital Sunday. Hours later, after the two countries’ presidents discussed the dispute on the sidelines of the NATO summit, the countries’ border police reached an agreement on allowing pilgrims from Georgia to enter the Azerbaijani section.

Thousands of pilgrims streamed to the monastery on Monday, in a protest that had been organized before the dispute was resolved.