Lazarus Is Risen! Truly He Is Risen! 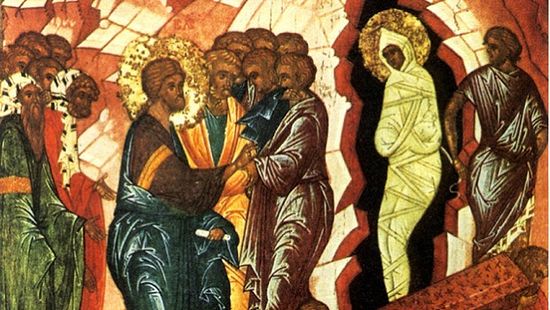 It perhaps may sound quite odd to our Orthodox Christian ears if on the Saturday of Lazarus, we were to greet each other with the words: “Lazarus is risen! Truly he is risen!” Naturally, no liturgical prescription or precedent exists for this. Nevertheless, the tone of the liturgy on this day is unmistakably very festive, intensely and intentionally celebratory, a stark break from the solemnity of the preceding forty days of fasting. Our Lord Jesus Christ miraculously raises Lazarus from the dead, typifying His own three-day resurrection from the tomb. This transitional weekend offers us a brief respite from our intensified fasting, bridging the preparatory Lenten season with the last leg of our journey – Holy and Great Week – in which we finally meet up with Christ and follow Him in His passion, His death, and triumphant victory over death.

On the Saturday of Lazarus, the Church confesses the very reason why the incarnate Son of God came into the world – to give hope and life in a world tainted by despair and death. It did not seem all that long ago when Christians all over the world rejoiced over the event of Jesus’ birth in the flesh. On this feast is recapitulated the very purpose of Christ’s mission, which is intimately related to the feast of Christmas. The hymnology of today’s feast tellingly witnesses to the cohabitation of the human and divine element in the Person of Christ, and their outstanding interplay before the tomb of Jesus’ friend St. Lazarus.

To demonstrate Your human energy, my Savior, You walk and weep and You ask where is Lazarus, and to declare Your divine such, You raise him from the dead (Second Canon of the Ninth Ode, Matins of St. Lazarus).

As God, the Lord had foreknowledge of Lazarus’ illness and imminent death. After receiving word of his friend’s critical condition, He hides this information from His disciples and deliberately delays His journey to Bethany, on the eastern foothills of the Mount of Olives, so that Lazarus can in fact die. The unbearable pain and anguish felt by Lazarus’ sisters, Mary and Martha, as well as Lazarus’ fellow countrymen, is but a minimal drop of water in the ocean of God’s fathomless love for mankind and His divine plan to foreshadow His own three-day Resurrection. He explains to His disciples: “This sickness is not unto death, but for the glory of God, that the Son of God may be glorified through it” (John 11:4 NKJV).

As man, however, Jesus Himself felt great sadness over Lazarus’ bodily death because He was filled with great love for him and his sisters. The Scriptures tell us that He “groaned in the spirit and was greatly troubled” (John 11:33) and that “Jesus wept” (John 11:35) and “groaned in Himself” (John 11:38) as He approached His friend’s grave. The senseless and violent nature of death frightened Jesus, but above all, as a fully human being, Christ embraced all of humanity, sharing our most intimate fears and sorrows. Yet, both Christ’s divine and human wills were in perfect harmony with each other. “Not as I (the human) will, but as we (the Triune God) will” (Luke 22:42), Jesus prayed in the Garden of Gethsemane when the temptation to abandon His mission assaulted Him.

This interplay of the human and the divine in the person of Christ also comes alive in the very act of His raising Lazarus from the grave. The people gathered before Lazarus’ tomb witness Jesus the Teacher, the Healer, the Son of Joseph, the Rabbi – Jesus the Man – approach the tomb, deeply moved in spirit, looking up to heaven in prayer and then shouting the words, “Lazarus, come forth!” What they do NOT perceive – and I submit this for your consideration – is the dialogue that occurs on a completely different level with a very unlikely interlocutor. As man, Jesus’ words to the dead man are heard by all, and they are certainly heard and obeyed by Lazarus. But that is not all that the Lord says. As God, Jesus converses with – or rather gives an order to – Hades himself and his arch-nemesis, Satan.

“I command you, O despicable Death, to release immediately from your custody the soul of My servant Lazarus. You will not disobey Me nor do I give you the right to complain against Me, who am the Lord and Master of all. For on this day, I will that the natural order of human life be overturned. He who was once dead and devoured in corruption is now in My custody and I choose to give him life. And in a few days, you will see greater things than these, for when I Myself descend into your bosom I will disembowel your entrails, and you will regurgitate the souls of all those who believe in Me and have been held under your captivity since the beginning of time. I, the Lord God, have spoken.”

This divine command issued to Hades and Satan ripped through the Underworld like an unbearable jolt of lightning. Utterly struck by seeing the fullness of the Godhead before him, Hades bowed low and obeyed out of fear of annihilation; realizing that his reign of terror was slowly drawing to a close, Hades is speechless. We can employ the hymns of the Church to help us understand the dynamics of this encounter.

By Your word, O Word of God, Lazarus now leaps out of death, having returned to this life. Therefore the people honor You with their branches, O Mighty One; for You shall destroy Hades utterly by Your own death (First Exaposteilarion, Matins of St. Lazarus).

The words of Christ, both to Lazarus and especially to Hades, secure for Jesus’ friend his salvation from the slumber of corruption and decay. And the miracle of Lazarus’ raising becomes the harbinger, the forerunner, of the Lord’s own Resurrection, with ramifications above and beyond anyone’s expectations.

By means of Lazarus has Christ already plundered you, O death. Where is your victory, O Hades? For the lament of Bethany is handed over now to you. Let us all wave against it our branches of victory (Second Exaposteilarion, Matins of St. Lazarus).

Four days after he had died, You raised up Lazarus in Bethany. As soon as You came to the tomb, Your voice became life to the dead man; and Hades, groaning in fear, released him. Great was the miracle! Very merciful Lord, glory to You (Ainoi, Matins of St. Lazarus).

For the first time in history, human mourning stemming from death is radically transformed into an ecstatic joy, and for the first time ever, Death’s insatiable pleasure at swallowing his victims is rendered extremely bitter and unpleasant.

So we see our Lord Jesus Christ operating simultaneously on two levels – on the level of the material realm and on the level of the spiritual realm, because He is at the same time both perfect God and perfect Man. And this observation is extremely important not only for the worldwide Church as a whole, but also for us in our local parishes who worship during this coming Great and Holy Week. With our bodily eyes, we see a reenactment of the Lord’s Passion. With our physical ears, we hear the Lord’s teachings as recorded in the Holy Scriptures. But with the eyes and ears of faith, when our souls are touched by the grace of God because we choose it to be so, we see and hear things not of this world. We see the divinity shining in the Person of Christ before Lazarus’ tomb and during His entry into Jerusalem. We hear the fullness of the Godhead addressing not only Lazarus but Hades and Satan as well. With sincere faith and humility and love, we are not simply spectators of events happening to Christ during Holy Week. We become engaged participants in these saving events, living them from the inside, from within Christ Himself, who shows that He is fully in control of His imminent passion and suffering. For this reason, if at all possible, prior to attending Holy Week services, we must prepare for them in prayer so that we can see things from the inside out, not from the outside in.

In closing, I would like to share with you a remarkable photo, which was attached to an email I received a while ago. Many of you have probably seen this image. 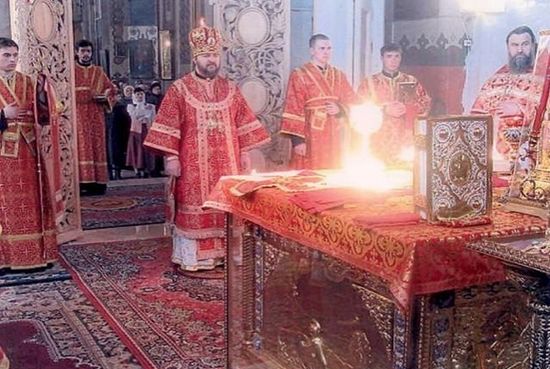 The email includes a photo of a Divine Liturgy celebrated in what appears to be a Russian Orthodox Church. Before the celebrant bishop, the concelebrating priests, deacons, and subdeacons in the altar, lay the consecrated Gifts upon the altar, in the Holy Paten and Chalice. The photo, however, is very unusual and cannot be comprehended by any rational stretch of the imagination. The Paten and Chalice appear to be shining so brilliantly that one would think they are ablaze! Nothing else on the altar table appears like this, nor anything else within the sanctuary – only the Paten and the Chalice. When the photographer had taken the photo, he had not seen anything. After the image was digitally printed, that is when this miraculous glow appeared. Likewise, he affirmed that no manipulation or tampering of the image was done.

From this incident, and from so many others, we are given glimpses and signs of God’s glory and God’s Kingdom. We see how the divine light permeates our human existence, inspiring us with the message that God is very much still a part of our world. God loves us beyond imagination and so, despite our lukewarm faith, He offers us signs to induce or strengthen our anemic faith in Him. And these signs are of the Kingdom, in which we experience things not according to our reality but according to His. This Holy Week, let us go a step beyond attending services; let us ask God in sincere prayer to help us see the world as He sees it, and to love the world as He loves it. For the choice is ours: we can either observe Christ’s suffering, dying, and rising from the dead from the sidelines – or we can immerse ourselves completely in the match, reaching the goal together with Him and basking in the fullness of His glory. Amen. (+) 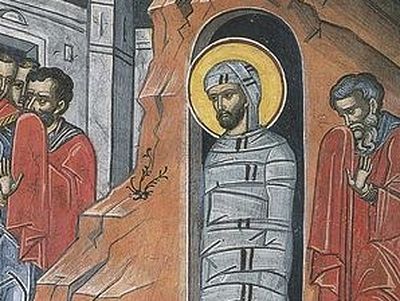 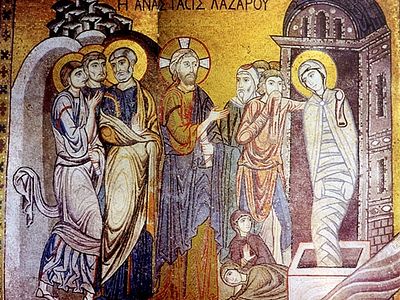 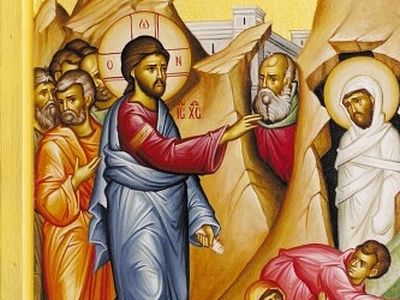 Lazarus Saturday
Archpriest Alexander Schmemann
"Having fulfilled Forty Days... we ask to see the Holy Week of Thy Passion." With these words sung at Vespers of Friday, Lent comes to its end and we enter into the annual commemoration of Christ's suffering, death and Resurrection. It begins on the Saturday of Lazarus.
Комментарии