Talks in Honor of St. Sergius of Radonezh 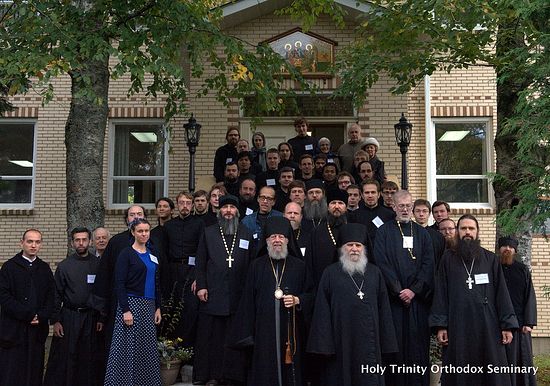 On Friday and Saturday, October 10–11, 2014, Holy Trinity Orthodox Seminary hosted an academic conference entitled “The Brightest Luminary of the Russian Land: The Life and Legacy of Saint Sergius of Radonezh." It was dedicated to the 700th anniversary of St. Sergius of Radonezh (1314-1392), one of the most revered Russian saints, the founder and first abbot of the Holy Trinity-St Sergius Lavra, who, due to the influence of his labours, was rightly called “the abbot of all Russia.”

The conference assembled Orthodox pastors and students of theology who presented papers on various aspects of St Sergius’ legacy. About 50-60 people were in attendance during these two days, including the students of the Holy Trinity Seminary, guests from other Orthodox seminaries, and interested members of the community who came in response to the announcement posted on the Seminary website. In the course of the conference, an exhibit of items related to St Sergius from the collection of Foundation of Russian History Museum at Holy Trinity Seminary was made available in the Seminary Hall through the services of museum Curator Michael Perekrestov.

Several videos from the conference are here presented.

Among the many presenters was seminarian John Martin (HTOS, fifth year), who reflected in his paper on the similarities between St Sergius’ life and the life of the sixth century Western monastic founder, St Benedict of Nursia. He noted a number of thought-provoking parallels and showed how these similarities were rooted in a common monastic tradition.

Seminarian Nicholas Williams (HTOS, Certificate for Pastoral Studies) gave an overview of the social and political influence of St Sergius himself and of the Trinity-St Sergius Lavra throughout the centuries and its role in formation of Russian identity focusing on the role of the Lavra during the Time of Troubles, and on its missionary publication activity in the nineteenth and early twentieth centuries.

Dr Alfred Kentigern Siewers, professor of English at Bucknell University and a student at Chicago Pastoral School, presented a paper on St Sergius of Radonezh and the Language of Creation, where reflected on St Sergius’ relation to nature, as expressed in the saint’s vita , using the language of the developing scholarly field of bio-semiotics. 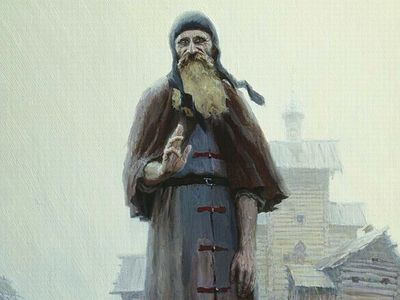 A Servant of the Holy Trinity
Deacon Georgiy Malkov

A Servant of the Holy Trinity
Deacon Georgiy Malkov
In the Orthodox consciousness, the brightest examples of a harmonious human personality are connected with the figure of St. Sergius of Radonezh, living “by the law of Christ”—humbly wise, warmly merciful toward every man and every creature, yet without the weakness of sentimentalism; always active, hardworking, whether it be in the work of everyday life or in deep prayer. 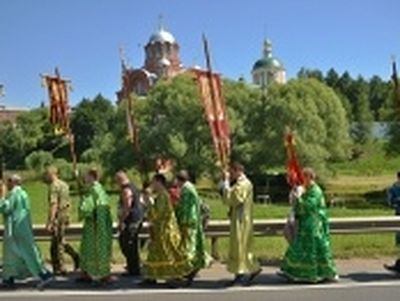 Cross procession in honor of the 700th anniversary of St. Sergius of Radonezh
Photogallery

Cross procession in honor of the 700th anniversary of St. Sergius of Radonezh
Photogallery
On July 16, 2014, a Cross procession took place in Russia from the Stravropegic Convent of the Protection of the Mother of God in Khotkovo, where St. Sergius was born, to the Annunciation field near Sergeyev Posad, the home of the Holy Trinity-St. Sergius Lavra. 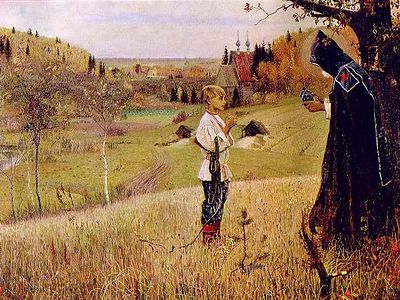 A Miracle of Knowledge: St. Sergius of Radonezh

A Miracle of Knowledge: St. Sergius of Radonezh
The venerable monk, when he had ended his prayers, glanced at the boy and, conscious that he beheld the chosen vessel of the Holy Spirit, he called him to his side, blessed him, bestowed on him a kiss in the name of Christ, and asked: "What art thou seeking, or what dost thou want, child?" The boy answered, "My soul desires above all things to understand the Holy Scriptures. I have to study reading and writing, and I am sorely vexed that I cannot learn these things. Will you, holy Father, pray to God for me, that he will give me understanding of book-learning?" The monk raised his hands and his eyes toward heaven, sighed, prayed to God, then said, "Amen."
Комментарии