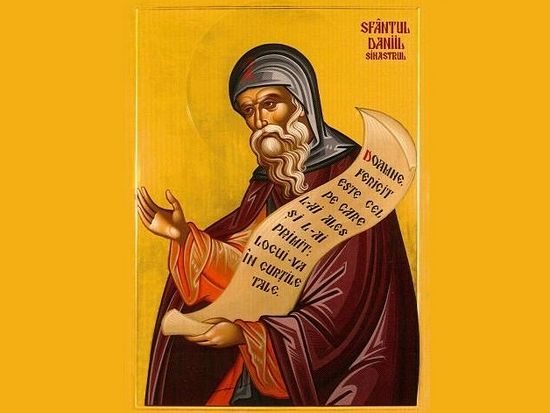 The venerable Daniil was born in a village not far from Rădăuţi, to righteous parents, being baptised with the name of Demetrius. Having loved the spiritual life, when he was 16 years old, he left his parents’ house and joined the community of the Rădăuţi Monastery dedicated to Saint Nicholas, growing in faith, good deeds, prayer and night vigils. Every day he read the writings of the Holy Fathers and the liturgical books, showing obedience and humbleness in everything he did by the abbot’s decision. He became a monk as a reward for his efforts, by the name of David, but his aspiration for more severe spiritual efforts led him to the Saint Leontius of Rădăuţi Monastery, close to today’s Laura village. There he worked together with the brethren of the monastic community by day and prayed unceasingly in his cell by night. Having seen his endeavours and noticing his continuous aspiration to God, the abbot of the monastery gave him the Great Schema, advised by his father confessor, receiving the name of Daniil.

Soon after he received the Great Schema he retired, with the blessing of his abbot, near Viţău brook, in the forests around Putna, where he dug a cell in a rock that can still be seen today, not far from Putna Monastery. His ascetic efforts would make him known rather soon, having been visited by many faithful who sought his advice and spiritual guidance, as well as his intercessions to God for the healing of their spiritual and physical ailments.

Of his many spiritual children that came to him rather often, one can mention the holy ruler Prince Stephan the Great (†1504), who received the spiritual advice and blessing of the pious hermit. Stephan is said to have come to the cell of the pious hermit for the first time in 1451 when his father was killed at Reuseni. St. Daniil encouraged him and predicted that he would be the ruling prince, which came true after six years in 1457. Following his advice, the great Stephan founded Putna Monastery in 1466. After the monastery was consecrated in 1470, the pious hermit went to live at the Eagle’s rock, near Voroneţ. Stephan the Great went to ask for his advice there too in 1476 after he was defeated at Războieni. The hermit encouraged him to gather his army again and defend the country and Christianity against the invading pagans. The prince followed his advice and promised that after every victory he would raise a church, and so he did. Thus, in addition to the great prince, Venerable Daniil was also protecting Moldavia through his continuous prayers well received by God. In 1488, Stephan the Great built Voroneţ Monastery in only four and a half months.

Then the venerable Daniil went to that community and was elected abbot. There, he advised the monastics and the neighboring hermits, having been spiritual father of many faithful who came to him for spiritual benefit. God also gave him the gift of miracles which the pious always try to hide. Yet, the healing of diseases and the casting out of evil spirits were signs of his holiness for which he was greatly venerated.

In 1496 St. Daniil fell asleep into the Lord, Whom he had served from his youth. The text on his gravestone laid by holy Prince Stephan reads: “This is the grave of our father David, hermit Daniil.” In 1547, at the command of the metropolitan of Moldavia, Gregory Roşca (†1570), who had been a disciple of Venerable Daniil, his face was painted with a saint’s halo over the entrance door, on the southern side of the church. The parchment St. Daniil holds in his hand reads: Come, my children, listen to me; I will teach you the fear of the LORD (Psalm 34:11).

On March 5, 1992, the Holy Synod of the Romanian Orthodox Church enlisted Venerable Daniil the Hermit in the calendar of saints to be celebrated on December 18.

Through his holy prayers, Lord Jesus Christ, our God, have mercy on us. Amen.

In thee, oh, Father, the one created in the image of God was saved, for taking up the Cross, thou didst follow Christ and, by thy deeds didst teach us to overlook the flesh, for it is perishable, but to be attentive to the soul since it is immortal. Therefore, oh, pious Father Daniil, your spirit rejoices with the angels. 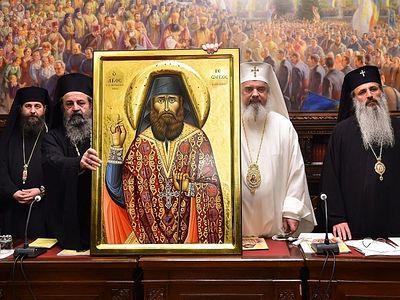 St. George of Drama Has Been Entered into the Calendar of the Romanian Orthodox Church 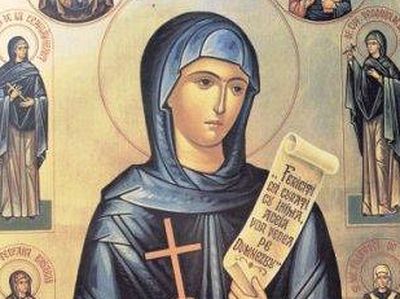 St. Paraskeva of Iasi is Celebrated Throughout Romania

St. Paraskeva of Iasi is Celebrated Throughout Romania On Wednesday October 14, 2015 Orthodox Romanians celebrated the feast of their much-beloved St. Paraskeva the New of Iasi, whose relics have been there, working countless miracles, since 1641. 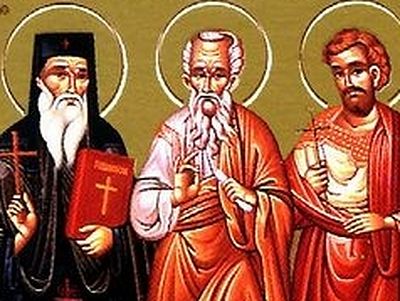 Repose of the Venerable Nicodemus the Hagiorite

Repose of the Venerable Nicodemus the Hagiorite According to the testimony of his contemporaries, St. Nicodemus was a simple man, without malice, unassuming, and distinguished by his profound concentration. He possessed remarkable mental abilities: he knew the Holy Scriptures by heart, remembering even the chapter, verse and page, and he could even recite long passages from the writings of the Holy Fathers from memory.
Комментарии