Earthquake-damaged icon to be repaired 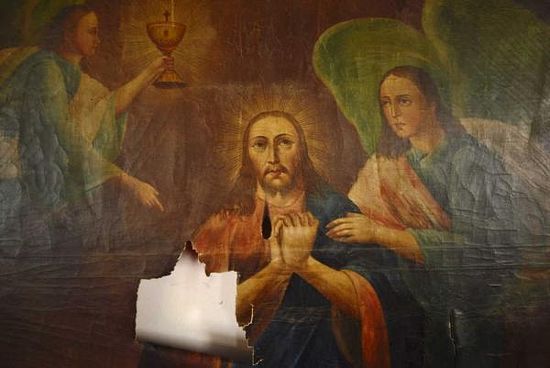 When the Kenai Peninsula was shaken by the 7.1 magnitude Iniskin earthquake in the early hours of Jan. 24, one of the many things to fall over was the heavy painted cross that stood behind the altar of Kenai’s Holy Assumption of the Virgin Mary Russian Orthodox church. Falling backward, it tore the canvas of a painted icon hanging on the wall behind it— an image of Jesus, flanked by two angels, praying in the Garden of Gethsemane before his arrest and crucificiction.

The cross has since been secured in its place by a wire loop, but the Gethsemane icon still has a large rip covering most of Jesus’ right arm. Last Saturday the Holy Assumption church council decided to send the icon to be repaired by a conservator in Colorado, who will patch and retouch both the tear and a burn mark made by a candle that used to hang from a ceiling chain in front of the icon.

The Gethsemane icon — part of an Eastern Orthodox tradition of religious art illustrating stories and personalities from the Bible and Church history — is among the many that fill the sanctuary of Holy Assumption. Over the church’s 121-year history, several have been coated with soot from over a century’s worth of weekly candle-lighting and incense-burning. Church member Dorothy Gray, who is also secretary of the nonprofit preservation group Russian Orthodox Sacred Sites in Alaska, estimated that in the past 20 years the church has sent over a dozen icons for restoration.

“They’re not only repaired, but they’re cleaned, and then there’s a protective coating that is layered on top to help preserve them and keep them from any type of further damage, from water, from smoke, from the candles, incense, and to keep them clean,” Gray said.

On the advice on an icon expert who visited Kenai several years ago, Holy Assumption has been systematically sending icons for restoration according to a prioritized list, Grey said. The Gethsemane icon, though, is the first to be treated for such a large rip.

This icon is distinguished in other ways as well — at roughly 3 1/2 by 4 feet, it’s among the church’s largest. While most of Holy Assumption’s icons were made — “written,” in church parlance — by Russians and imported to Alaska, the Gethsemane icon is among three at Holy Assumption written by the Alaska Native iconographer Grigorii Petukhov, an Aleut who lived in Sitka during the mid-1800s.

Though the Russian Orthodox church was prevalent throughout Native communities of the time, Petukhov was one of the few Alaskan iconographers — perhaps the only one, said Father Andrew Thomas, priest of Holy Assumption.

The icon’s tear and scorch mark will be repaired by an art conservator in Colorado, Grey said. Getting the icon there and how much it will cost are still matters the church is working out.

Grey said the icon will be shipped in a flat, custom-built box of either wood or foam rubber-cushioned cardboard. For the restoration itself, she said the church is still seeking a cost estimate, but guessed that it could cost $5,000 to $6,000. Previously, she said, repairs to smaller, less-damaged icons have cost between $1,000-$2,000. Gray said the church will set up a crowdfunding website to raise money for shipping and repairing the icon.