Do Not Lose the Fullness of Being 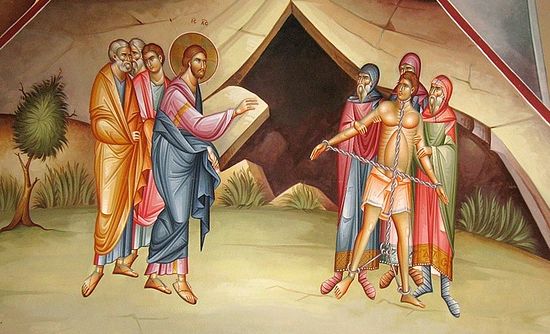 Brothers and sisters, the Holy Gospel, as a wise guide of children, gradually leads us to the comprehension of a mysterious world. Yesterday at the Liturgy we heard how Jesus Christ, during the storm on the Sea of Galilee, forbade the winds and waves—and they stopped, and became still.

Today the Gospel story leads us to yet a higher comprehension of the all-reigning power of God, which rules not only the elements, but also the unseen, spiritual world. At the services we heard the Gospel about the Gadarene demoniac, whom our Lord Jesus Christ freed from the legion of demons. He commanded the regiment of demons that had built their nest in this wretched man to depart from him and enter the herd of swine.

The demons, who are filled with extreme hatred and envy against the human race, are ready to torture any person; but their actions are limited by the power of God. And they are all the more brazen and merciless when there is no God near, or more precisely, within the man. When the fool says in his heart, THERE IS NO GOD, and then Christ comes into the soul, they are seized with fear and fright, showing their slavish existence.

When Christ came onto the shore He was met by a man from the town who was possessed by demons for many years, who wore no clothes, and lived not in a house but in the graves.

When he saw Jesus he shouted, fell down before Him, and said in a loud voice, What have I to do with thee, Jesus, thou Son of God most high? I beseech thee, torment me not (Lk. 8:28).

When a demon possesses a man he as if saddles him, turns him into a swine that lives in filth, digging the earth with his snout, and counting his lowest passions as supreme blessedness.

The life filled with blessedness, which according to the Savior’s words, I am come that they might have life, and that they might have it more abundantly (Jn. 10:10) man is called to inherit, is taken away from the wretch by the demon through passions and sin. Instead of becoming the foal of an ass upon which Christ seats Himself and leads him into the Kingdom of Heaven, the Jerusalem on high, he becomes a filthy swine, drowning in the sea of sins and passions. And we see that those who make themselves like swine and live according to purely earthly interests are numbering more and more not in the thousands but millions, even whole nations and civilizations. It is torturous for these nations, cultures, subcultures, or societies to watch as other nations build their earthly existence upon the Gospel values, the teachings of Christ. They as if exclaim along with the demons abiding in the Gadarene demoniac, “We beg you not to torment us—by Your presence, and even worse by the words proceeding from Your most pure lips. You bring us agony and extreme discomfort with your teachings. We need freedom without Christ, so that we can trample upon our conscience and even our common sense, and follow a swinish, demonic will.

The pagan Gergesenes, grieved by the ruin of their herd of swine, asked Christ to depart from them. They were guided by purely material interests. To them it was not important that Christ manifested His divine power in their lands, commanding the elements and spirits; not important that He healed the wretched man from demonic possession; not important that by a word He forced the demons, which according to the words of St. Seraphim of Sarov could turn the world upside down with just one of their claws, to timidly move into the swine. It was important to the Gergesenes that they lost their property, important that someone had intruded upon their “holy of holies”—the world of material values. St. Nicholai (Velimirovich) admitted sorrowfully that if the Gergesenes could rise from their tombs and count, they would count in Christian Europe (or the United States) a huge number of sympathizers. The Gergasenes at least asked Christ to leave them, while the Europeans drive Christ away, just so that they can be left alone with their swine and masters—the demons. This judgment is terrible in its categoricalness. But it was pronounced by a saint, back in the mid twentieth century. And what about today?

We, brothers and sisters, are witnesses to how diverse the manifestations are of personal pseudo-freedom that have captivated unfortunate people. Game addiction, internet dependency, departure from reality into various forms of virtual reality; and this is not to mention the depravity, drunkenness, drug addiction, and all sorts of things that give man the illusion of a fullness of being but which in fact rob him of that fullness. That blessed, beautiful, royal existence—Life, and Life in abundance, is stolen from wretched man by the evil demons. They as if whisper to him, “The Church, Christianity, is all just the boring past. Don’t waste your time—taste life, and take whatever you can from it.”

The remarkable Russian philosopher A. S. Panarin, our contemporary, noted with astounding accuracy:

Many thinkers who observed the destruction of the comparatively prosperous and decent order of the nineteenth century have asked the question: How was it possible that people followed evil—not out of ignorance but consciously, with Mephistophelian pride? The tragic paradox of modern existence is that good presents itself as something static, and thus “boring”, while evil is dynamic and by this particular quality attracts the post-traditional personality, which fears more than anything falling captive to a staid way of life, tradition, and patriarchal discipline.”

Today, if we ask a scholar, a successful businessman, a bureaucrat, a student, a schoolchild, or just the first person we meet, “What do you think: do demons exist, and what is their power over people?” then we would very often be met with a perplexed smile. Be real! This is the twenty-first century, and you’re talking about some medieval idea? We are trying to live according to our conscience, the constitution, the laws of the land. What do demons have to do with anything?

But this skepticism also lived in people significantly earlier than the twenty-first century. Christ’s contemporaries, the Sadducees, scrupulously fulfilled the Law of Moses but did not believe in the existence of demons. By miraculously healing the Gadarene sufferer our Lord Jesus Christ put their disbelief and hardness of soul to shame.

There are manifestations from the spiritual world also in our times; even the world of fallen evil spirits of the air sober a man, and often the most wise Providence of the All-good God turns him to his Creator and Provider.

Not long ago I heard a story about a man who through the passion of drunkenness had come to a extreme state of soul—he had delirium tremens, and was brought to the Sklifosovsky Institute [an emergency hospital in Moscow.—Trans.], where he was bound hand and feet, since he was very violent. The experienced doctor had to leave the room for a certain reason and asked the young nurse to watch him carefully, so that nothing would happen with him. But the man began telling her a remarkably convincing story in a style, as she later related, that far exceeded the ability of a man in such a state, the style of a great writer, that he was being pursued by enemy creditors who were trying to seize his property, and that they were going to come and kill him there. The poor girl believed him and slightly loosened the bands on his hands. Then, like the Gadarene demoniac who broke the chains that had been put on him, he tore off the strong, nylon bands with which his hands and feet had been tied, and set off running through the corridors of this massive building. Moreover, he ran a route that he could not possibly have known, as if someone were telling him where to go. Anyone who has ever been to this institute would know that it has a very complex layout, with various doors and dividers; but he ran as if according to some computer program, without the slightest hesitation, down a complex route to the attic, then jumped through this eighth-story window and fell at the feet of a an army general who was coming to visit his wife. This general was an absolutely non-religious, materialistic man, who would definitely have smiled condescendingly at our question about demons. But he looked at that man who had fallen in front of him, with protruding bone fractures, still shouting that fierce creditors were coming to murder him. Later when he was told more about the man’s escapade, the general became a believer—he understood that demons really do exist.

How can we leave the passions, demons, and evil habits that harden us? How can we regain the thread of grace-filled life that the villainous, destroying demons have stolen from us—the thread that takes us from strength to strength to the highest blessedness given to man: the blessedness of communion with God, our Creator and Provider?

Let us be like the Gadarene demoniac, let us shout aloud in prayer, falling down before the Savior, and repent of all our transgressions against His holy commandments. Then the Kingdom of Heaven, blessed life, will not be slow in coming near our hearts, according to the Gospel promise. And when we are healed and are sitting at Jesus’s feet, clothed and in our right minds, then we will return to our home, to the people around us, the people we see every day, and we will tell them what great thing God has done for us. For having been tempted, we can bring help and consolation to those who are tempted (cf. Heb. 2:18). Amen.