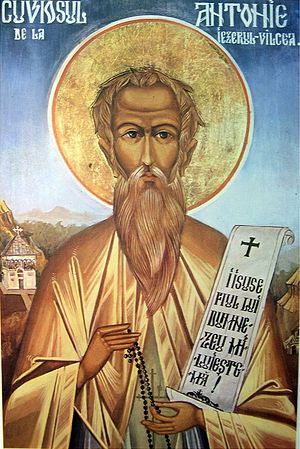 Saint Anthony the Hesychast was born in the sub-Carpathian Mountains of Vilcea county in Romania, and he loved Christ from his early childhood. He knew many ascetics who lived as hesychasts, and they had a profound effect upon his life. He received the monastic tonsure at the Iezerul Skete, where he lived for several years as a young man.

In 1690, after he had gained experience in the ascetical life, the igumen blessed him to live as a solitary on Mt Iezerul. There he lived in a small cave, glorifying God and struggling against demons. Only real hesychasts know what great temptations and trials face those who wish to live as solitaries.

Saint Anthony labored for three years digging a chapel out of the cliffside with his own hands. He would work during the day, and keep vigil by night. When the chapel was finished, it was consecrated by Bishop Hilarion of Rimnicu Vilcea. Saint Anthony prayed there unceasingly, reading the daily services and making hundreds of prostrations. A hieromonk from the Skete would come from time to time to celebrate the Divine Liturgy on Feast Days and during the fasts.

Saint Anthony’s holy life became known throughout the region, and many of the clergy and laity flocked to him for spiritual advice or consolation in sorrows. He received them with love, gave them the help they needed, and sent them home in peace. Through his influence, a genuine spiritual revival took place in sub-Carpathian Oltenia.

Saint Anthony fell asleep in the Lord in 1714 after twenty-five years of spiritual struggles. His disciples mourned him, and buried him beside his small chapel. The faithful still go there to light candles and to pray, seeking his blessing and assistance.

Saint Anthony the Hesychast was glorified by the Orthodox Church of Romania in 1992.

With the streams of your tears you cultivated the barrenness of the desert; / and by your deep sighs, you bore fruit a hundredfold in your labors. / You became a luminary, shining upon the world with miracles. / O our righteous Father Anthony, intercede with Christ God that our souls be saved!