The example of St. Catherine the Great Martyr 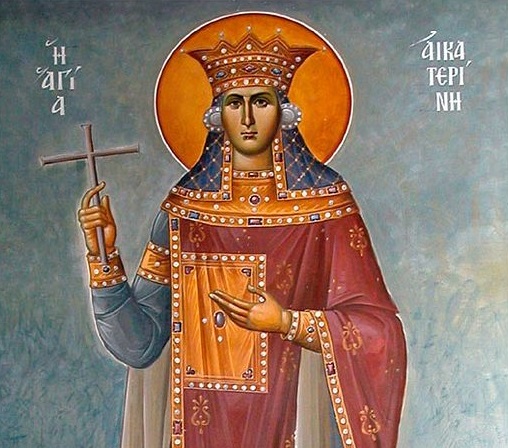 We rejoice today, on this day of the holy Great Martyr Catherine, to serve the Divine Liturgy in this majestic Ekaterinodar[1] cathedral, to pray to the holy great martyr for our people, for our Church, for the Kuban land,[2] to turn to her in prayer, for she is powerful in intercession before God.

We are amazed when we read the life of the holy Great Martyr Catherine, especially comparing it to the lives of many modern young people. She was about twenty years old when the emperor Maximian, the era of persecution of the Church already taken off, visited Alexandria, where Catherine, the viceroy’s daughter, lived. Many amongst the citizens of that time were already Christians, and even Catherine’s mother, the wife of the viceroy, a pagan who was to pursue the policies of the pagan Roman emperor, was a secret Christian. She raised her daughter in the Christian faith and cultivated within her a strong religious feeling, and such strong faith that when the emperor himself came to Alexandria, and they started to sacrifice to pagan gods in his honor, and the whole city was filled with the smoke of the offerings of animals, and also of Christians who were thrown into cauldrons to please the pagan emperor, this delicate, beautiful, well-learned girl confessed her faith before the face of the emperor.

The terrified and astonished worldly ruler was appalled by what he heard. Catherine’s words were very wise and powerful. She was highly educated and possessed great abilities from God. Then the emperor began to flatter her with riches and glory. He was prepared to take her with him to Rome, so struck was he by her beauty and intelligence. But the great martyr refused, angrily denying all the emperor’s proposals, and bravely witnessed to her faith in the Lord. 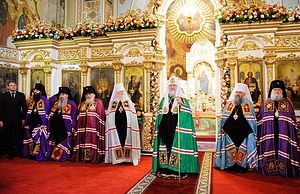 From the viewpoint of the pragmatic logic of the lives of modern people, all that Catherine did was insanity. Youth, beauty, education, career, enjoying life, happiness, money—all was laid before her. She not only refused it—she chose death together with those who were smoldering in the terrible fires. She confessed Christ. But why did she do this? Because she couldn’t not do it. What kind of power motivated the holy great martyr? No strength of conviction here can help—all conviction disappears in the face of physical pain. St. Catherine acted this way because she had not only a Christian view on life, but a real experience of communion with God. She felt the presence of Christ so realistically, as we feel the presence of one another in our lives. Christ for her was of the most supreme value. He gave her peace, joy, and happiness above all human wellbeing. Therefore there could be no speech which would convince her to renounce Christ, or replace Him, and destroy that rich inner peace and genuine happiness given her by God. And she, full of great strength, denounced the emperor’s pagan error, by her blood bearing witness to the presence in her life of the power of Divine grace.

The life of the holy great martyr is a great example for us. Today’s life so often seduces us with various types of temptations, money, career, power, status, acquiring new things, which would favorably distinguish us from other, imaginary understandings of prestige. What a multitude of temptations! And tempted, we do not renounce our faith, but mix it with temptation. But St. Catherine was able to reconcile, remaining a secret Christian, smiling at the pagan emperor. She lived not in a family of beggars, but of a rich man, of the emperor’s viceroy. That means the wealth which surrounded her did not hinder her from having a real experience of communion with God. And when the question arose, where was her heart, she answered where it was. In Holy Scripture it is said: where your treasure is, there will your heart be also (Mt. 6:21). Treasure for St. Catherine was the Lord, and not those good things with which she was surrounded. And God Himself gave her great strength of spirit. This is why we recall in the twenty-first century the events of the beginning of the fourth century and remember the holy Great Marty Catherine as a genius of spirit, as a great heroine, as a saint well-pleasing to God.

St. Catherine was venerated in Rus’. It’s no coincidence that her name was given to empresses who were not born in Russia but took new names in Baptism. They joyfully received the name of Catherine precisely to attract the help of this saint to themselves and to resemble her at least to some small degree in strength of spirit.

Cities in Russia were named in honor of St. Catherine, not the Tsarina, that the lives of their people would pass under her prayerful protection, that they would have a guideline, an ideal, an example, according to which simple, and rich, and poor, and noble, and common people could acquire the greatest strength of spirit, capable of making of an ordinary man a genius of spirit, a hero, and holy person. And now, located in the center of the city of Ekaterinodar, named in honor of the holy great martyr, together with you we turn to her: holy Great Martyr Catherine, help us in our lives, help us overcome hardships and sorrows, temptations and seductions, strengthening our strength of spirit, without which there are no victories in human life.

May the Lord and the Mother of God keep you by the prayers of the holy Great Martyr Catherine. Amen.

December 7, 2010, on the commemoration day of St. Catherine the Great Martyr, in St. Catherine’s Cathedral in Krasnodar

[1] Until 1920 Krasnodar was known as Ekaterinodar.

[2] Kuban is a geographic region of Southern Russia surrounding the Kuban River, on the Black Sea between the Don Steppe, the Volga Delta and the Caucasus, and separated from the Crimean Peninsula to the west by the Kerch Strait. 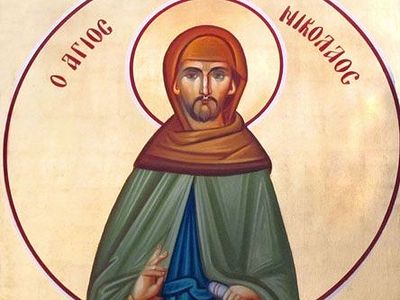 Holy New Martyr Nicholas of Chios
Commemorated October 31/November 13
Renouncing all physical comforts, he attended only to prayer, fasting, vigils and countless prostrations, to the point that those around him became concerned for him. One day, as he venerated the icon of the Beheading of Saint John the Forerunner and Baptist, he was seized by the desire to emulate him and accomplish his repentance by martyrdom. He wept as he kissed the icon of the Holy Forerunner, begging him to make him worthy of following after him for the love of Christ. 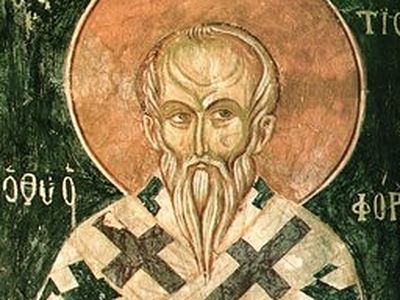 Hieromartyr Ignatius the God-Bearer the Bishop of Antioch

Hieromartyr Ignatius the God-Bearer the Bishop of Antioch
Tradition suggests that when St Ignatius was a little boy, the Savior hugged him and said: “Unless you turn and become as little children, you shall not enter into the Kingdom of Heaven”. The saint was called “God-Bearer” (Theophoros), because he bore God in his heart and prayed unceasingly to Him. 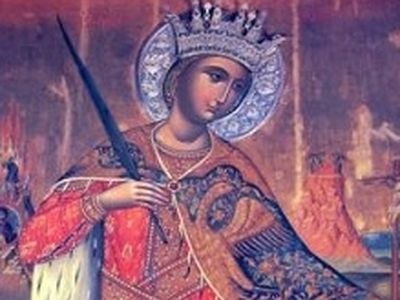 Bride of Christ, St. Catherine of Alexandria
Pilgrms approach one by one to kiss the Saint’s precious relics, each with the secret prayer closest to his heart, and then bow to receive the ring blessed by her grace, to be worn forever in mystical union with the Heavenly Bridegroom – and all those illumined by the Holy Light of Sinai to exchange the worship of this world’s false gods for union with the Most High – inspired by the radiant example of our Princess among the Saints, the Holy Great-Martyr and All-Wise Bride of Christ, Catherine of Alexandria.
Комментарии